The Shea Stadium concert on 15 August was record-breaking and one of the most famous concert events of its era.  Over 55,000 people saw the concert.  “Beatlemania” was at one of its highest marks at the Shea show. Film footage taken at the concert shows many teenagers and women crying, screaming, and even fainting. The crowd noise was such that security guards can be seen covering their ears as The Beatles enter the field. 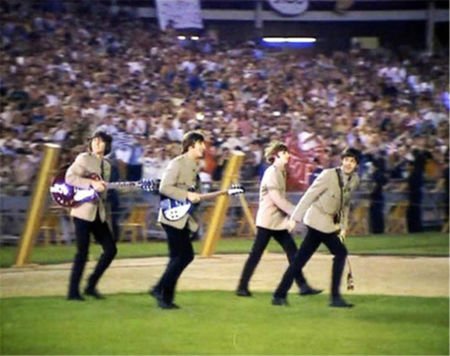 The Beatles interview before Shea Stadium:

All songs written by John Lennon and Paul McCartney, except where noted.

The Beatles at Shea Stadium is also a documentary of The Beatles’ concert. The documentary was filmed, using fourteen cameras to capture the euphoria and mass hysteria that was Beatlemania in America in 1965. We have included the half hour Beatles segment from the one hour documentary:

PAUL: “There was a fellow writing in the paper today saying that we should stop all these concerts… and he said this one wasn’t fun. Well, I don’t agree with him. I think it’s the greatest thing, you know. If that wasn’t teenagers enjoying themselves, what is?”

JOHN: “It was pretty wild. Shea was great. It was great because of it’s size, and because it was organized well. I’m sorry for the people who didn’t get to see it. Some shows you haven’t missed anything because you wouldn’t have heard us, but other times I think you might have enjoyed it.”

GEORGE: “Any concert where there’s so many people, it’s always amazing. Last year was like that at The Hollywood Bowl. At the time it was the biggest show we’d done. But this one topped that. For all the ones who came to see us, I hope you enjoyed the show and thanks for coming. For all the ones who couldn’t go, we’ll be back next year and you can go then. And for all the ones who didn’t want to go and don’t like us, …well, …hello!”

RINGO: “I’d just like to say thanks to all the fans, because it’s the fans that make you. Without them you’re nothing, you know, and we love the fans as much as they love us. I saw one columnist saying that all the kids at Shea Stadium weren’t having a good time. But if that’s not having a healthy laugh… shouting and running ’round… what is, you know. I mean, what does he know about it, just because he’s about ninety.”

The Beatles returned to Shea Stadium during their final tour, on 23 August 1966.