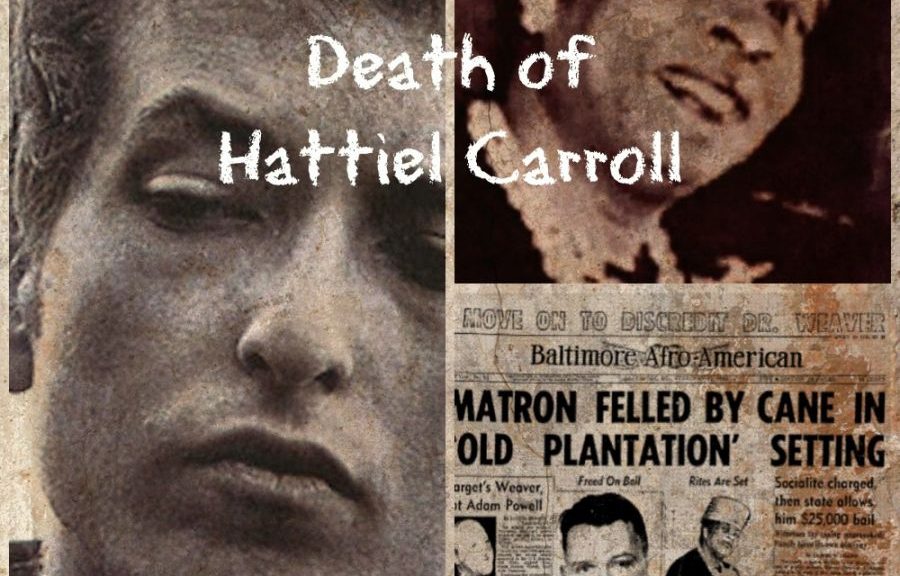 The story I took out of the newspaper and I only changed the words. It’s, er… ..Well, I changed, er… the reporters view into… I used it I used it for something I wanted to say, er, and I used his view, the Maryland reporters view to get at what I wanted to say and turn it that way. And I used a true story, that’s all. I could have used a made-up story.
~Bob Dylan (to Steve Allen – Feb. 1964)

“The Lonesome Death of Hattie Carroll” is an extremely moving song that has stood the test of time better than any of Dylan’s other early topical songs of this sort (retellings of real events, usually tragedies, usually with a moral attached or implicit). Dylan sings it from the heart; he really cares about the woman who died-her dignity and the value of her life come through in the song, it is a memorial to her and a tribute to people like her as much as it is an attack on her killer and people like him and the system that coddles them.
~Paul Williams (Bob Dylan Performing Artist I: The Early Years 1960-1973

William Zanzinger, who at twenty-four years
Owns a tobacco farm of six hundred acres
With rich wealthy parents who provide and protect him
And high office relations in the politics of Maryland
Reacted to his deed with a shrug of his shoulders
And swear words and sneering, and his tongue it was snarling
In a matter of minutes on bail was out walking
But you who philosophize disgrace and criticize all fears
Take the rag away from your face
Now ain’t the time for your tears

Hattie Carroll was a maid of the kitchen
She was fifty-one years old and gave birth to ten children
Who carried the dishes and took out the garbage
And never sat once at the head of the table
And didn’t even talk to the people at the table
Who just cleaned up all the food from the table
And emptied the ashtrays on a whole other level
Got killed by a blow, lay slain by a cane
That sailed through the air and came down through the room
Doomed and determined to destroy all the gentle
And she never done nothing to William Zanzinger
But you who philosophize disgrace and criticize all fears
Take the rag away from your face
Now ain’t the time for your tears

In the courtroom of honor, the judge pounded his gavel
To show that all’s equal and that the courts are on the level
And that the strings in the books ain’t pulled and persuaded
And that even the nobles get properly handled
Once that the cops have chased after and caught ’em
And that the ladder of law has no top and no bottom
Stared at the person who killed for no reason
Who just happened to be feelin’ that way without warnin’
And he spoke through his cloak, most deep and distinguished
And handed out strongly, for penalty and repentance
William Zanzinger with a six-month sentence
Oh, but you who philosophize disgrace and criticize all fears
Bury the rag deep in your face
For now’s the time for your tears