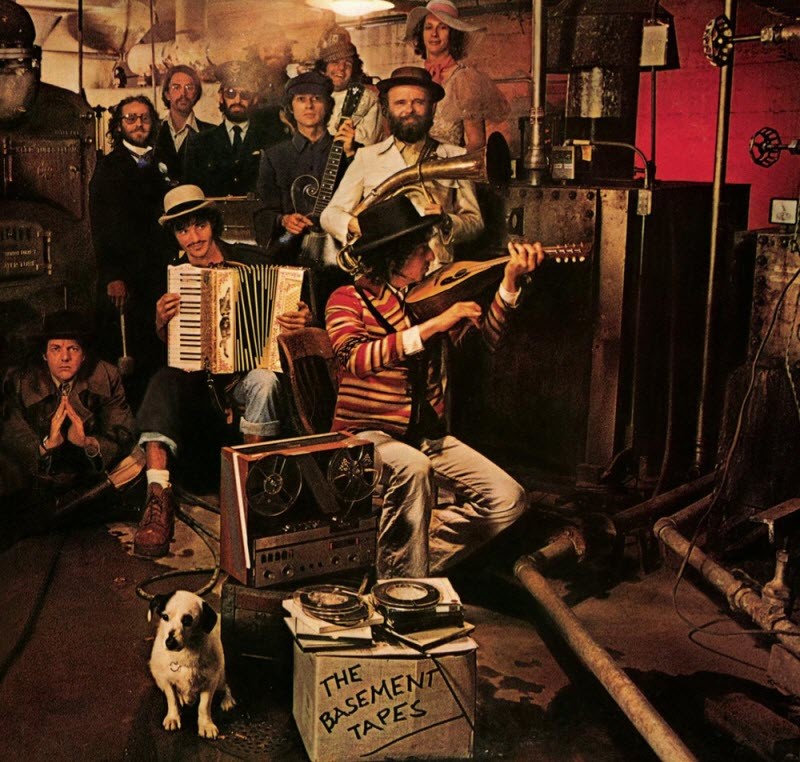 The Basement Tapes is a studio album by American singer-songwriter Bob Dylan and the Band, released on June 26, 1975 by Columbia Records. It is Dylan’s sixteenth studio album. The songs featuring Dylan’s vocals were recorded in 1967, eight years before the album’s release, at houses in and around Woodstock, New York, where Dylan and the Band lived. Although most of the Dylan songs had appeared on bootleg records, The Basement Tapes marked their first official release.

When Columbia Records prepared the album for official release in 1975, eight songs recorded solely by the Band—in various locations between 1967 and 1975—were added to sixteen songs taped by Dylan and the Band in 1967. Overdubs were added in 1975 to songs from both categories. The Basement Tapes was critically acclaimed upon release, and reached number seven on the Billboard 200 album chart. Subsequently, the format of the 1975 album has led critics to question the omission of some of Dylan’s best-known 1967 compositions and the inclusion of material by the Band that was not recorded in Woodstock. 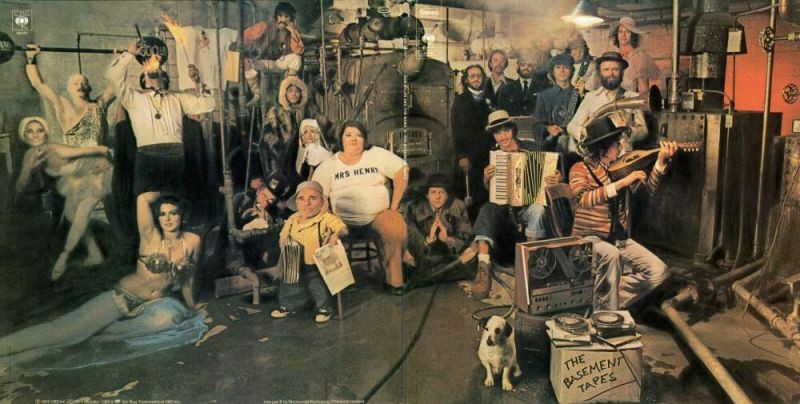 In January 1975, Dylan unexpectedly gave permission for the release of a selection of the basement recordings, perhaps because he and Grossman had resolved their legal dispute over the Dwarf Music copyrights on his songs. Clinton Heylin argues that Dylan was able to consent following the critical and commercial success of his album Blood on the Tracks, released that same month: “After Blood on the Tracks, The Basement Tapes no longer had the status of a final reminder of Dylan’s lost genius”. In 1975, as well, the Band purchased Shangri-La ranch in Malibu, California, which they transformed into their recording studio.

Engineer Rob Fraboni was brought to Shangri-La to clean up the recordings still in the possession of Hudson, the original engineer. Fraboni had worked on Dylan’s Planet Waves album, with backing by the Band, and the live Dylan–Band album Before the Flood, both released in 1974. Fraboni has described Robertson as the dominant voice in selecting the final tracks for The Basement Tapes and reported that Dylan was not in the studio very often. The stereo recordings made by Hudson were remixed to mono, while Robertson and other members of the Band overdubbed new keyboard, guitar, and drum parts onto some of the 1967 Woodstock recordings. According to Fraboni, four new songs by the Band were also recorded in preparation for the album’s official release, one of which, a cover of Chuck Berry’s “Going Back to Memphis”, did not end up being included. There is disagreement about the recording date of the other three songs: “Bessie Smith”, “Ain’t No More Cane” and “Don’t Ya Tell Henry”. While Fraboni has recalled that the Band taped them in 1975, the liner notes for the reissued versions of the Band’s own albums state that these songs were recorded between 1967 and 1970. Ultimately, eight of the twenty-four songs on The Basement Tapes did not feature Dylan, several of them studio outtakes postdating the sessions at Big Pink. In justifying their inclusion, Robertson explained that he, Hudson and Dylan did not have access to all the basement recordings: “We had access to some of the songs. Some of these things came under the heading of ‘homemade’ which meant a Basement Tape to us.” Robertson has suggested that the Basement Tapes are, for him, “a process, a homemade feel” and so could include recordings from a wide variety of sources. 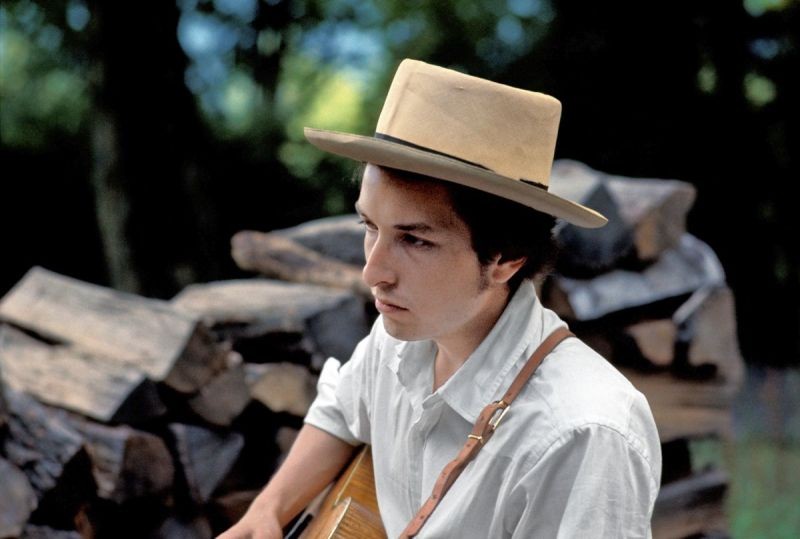 ..Yeah, like The Basement Tapes. But it doesn’t occur to me to put it out. If I wrote a song three years ago, I seldom go back and get that. I just leave’em alone. I never really liked The Basement Tapes. I mean, they were just songs we had done for the publishing company, as I remember. They were used only for other artists to record those songs. I wouldn’t have put’em out. But, you know, Columbia wanted to put’em out, so what can
you do?
[Kurt Loder: You don’t think that album has a great feeling to it? That material really has an aura.]
I can’t even remember it. People have told me they think it’s very Americana and all that. I don’t know what they’re talkin’ about.
~Bob Dylan (Kurt Loder interview, March 1984)

The cover photograph for the 1975 album was taken by designer and photographer Reid Miles in the basement of a Los Angeles YMCA. It poses Dylan and the Band alongside characters suggested by the songs: a woman in a Mrs. Henry T-shirt, an Eskimo, a circus strongman and a dwarf who has been identified as Angelo Rossitto. Robertson wears a blue Mao-style suit, and Manuel wears an RAF flight lieutenant uniform. Michael Gray has identified musicians David Blue and Neil Young in the photo. Others have claimed that Young was not in the photo. 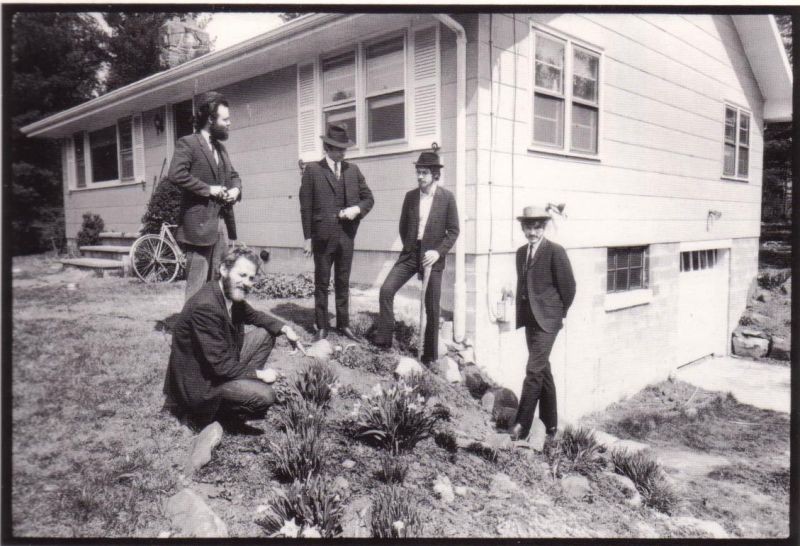 ..though revealing in their own right, the Band tracks only pollute the official set and reduce its stature.
~Clinton Heylin

[The Songs]..sound like they were made in a cardboard box. I think [Dylan] was trying to write songs that sounded like he’d just found them under a stone. As if they sound like real folk songs—because if you go back into the folk tradition, you will find songs as dark and as deep as these.
~Elvis Costello