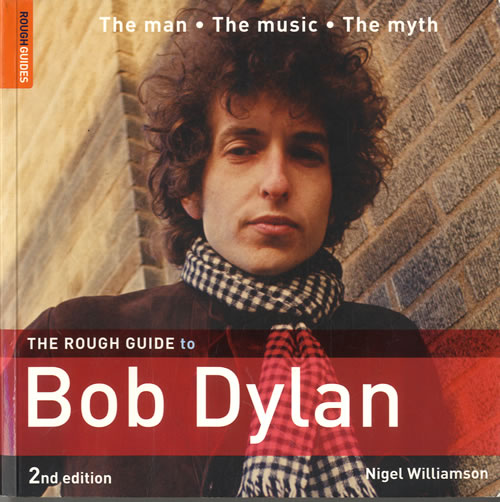 Nigel Williams is a British journalist and author. Educated at University College London, Williamson worked as a reporter on Tribune (1982–84) and was then briefly its literary editor (1984) before becoming editor (1984–87) as successor to Chris Mullin.

He writes on pop and world music for a variety of publications, including the magazines Uncut and Songlines. He has also written books, among them, The Rough Guide to Bob Dylan.

He made 4 Bob Dylan playlists for The Rough Guide Book of playlists, this is the 1st of them:

He also included Mixed Up Confusion (as the 5th track), that’s not on Spotify, so here’s a YouTube audio clip:

Nigel Williamson (The Rough Guide to Playlists, 2005):
1. Blowin’ In The Wind
“How could you not start with this anthem? Yet, oddly it was never a hit for Bob Dylan, with Peter, Paul and Mary getting all the chart action.”

2. A Hard Rain’s Gonna Fall
“Inspired by the Cuban missile crisis, almost every line could have made a song in itself. Dylan said at the time he put them together because he didn’t know if there’d be enough time left to write them all.”

3. Don’t Think Twice It’s All Right
“He could write tender love songs too, when he wasn’t to busy putting the world to rights.”

4. Masters of War
“The angriest, most potent protest song he ever wrote – and as relevant today as it was forty-sometimes years ago.”

5. Mixed Up Confusion
“An early rocker recorded at the time of the Freewheelin’ sessions that pointed the way to what was to happen when he went electric.”

6. The Times They Are A-changin’
“Not the familiar studio version, but the jaw-dropping 1963 live performance featured in Martin Scorsese’s splendid documentary” Note: not sure I found the right version here, please help me in the comments section.

7. The Lonesome Death of Hattie Carroll
“Stunning storytelling on one of Bob’s most effective protest songs. As objective as a newspaper reporter but with an emotional punch so strong it required no rhetorical flourishes.”

8. Chimes of Freedom
For the countless “accused, misused…the abandoned and forsaken” – Dylan at his most humane and universal. Critic Paul Williams reckoned it Bob’s “Sermon on the mount””.

9. To Ramona
“The best of several songs inspired by the end of Dylan’s relationship with Suze rotolo. That was her on the cover of Freewheelin’ and when she turned up in Scorsese’s 2005 biopic she still looked like an angel.”

10. It Ain’t Me Babe
“A farewell message to the folkies on his last all-acoustic album for almost thirty years.”