Down at the well they’ve got a new machine
Foreman says it cuts manpower by fifteen
But that ain’t natural, well so old Clay would say
You see he’s a horse drawn man until his dying day.

“…Tumbleweed Connection, fortuitously recorded prior to Elton’s commercial explosion and thus dictated only by the artistic impulses of the artist and his creative team – Taupin, Dudgeon and string arranger Paul Buckmaster (who’d teamed with Dudgeon on David Bowie’s “Space Oddity”) – presented a far more unified musical and thematic vision. Not only that, but the LP was created as an album of interlocking songs, with no thought given to radio singles (an utterly pure situation that would be impossible for them to repeat).

Inspired by The Band’s Music From Big Pink, Tumbleweed… was born out of Taupin’s fascination with Americana, largely inspired by western movies, as John reacted to the sheaf of lyrics he was given with synergistic flights of musical fancy.”
– Uncut Magazine

Tumbleweed Connection is the third album by Elton John (and collaborator Bernie Taupin). It is a concept album based on country and western/Americana themes. It is one of Elton John’s best albums.

All songs are written by John and Bernie Taupin, with the exception of “Love Song” by Lesley Duncan. The album was recorded at Trident Studios, London, England in March 1970 and released in October of the same year. It peaked at #2 on the UK Albums Chart and #5 on the US Billboard 200 chart. In the US, it was certified gold in March 1971 and platinum in August 1998 by the RIAA.

In 2003, Tumbleweed Connection was ranked #458 on Rolling Stone magazine’s list of the 500 greatest albums of all time. Dee Murray and Nigel Olsson appear for the first time together on this album as the rhythm section on “Amoreena”. Olsson had played on one track on Empty Sky for John in 1969. It is Murray’s first appearance on an Elton John album. 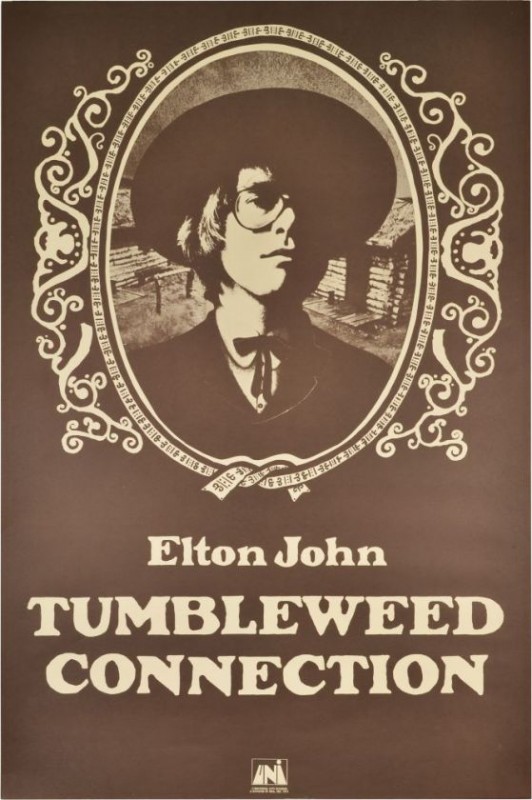 In 1975, the film Dog Day Afternoon featured “Amoreena” in the opening sequence. In 1998, a bootleg CD was released called Tumbleweed Collection. This was a collection of piano demos and live tracks.

The song “Country Comfort” was released as a single from the album as a b side to “Your Song” by DJM, and one of the songs recorded during the sessions, “Into the Old Man’s Shoes” was released as a b-side for at least one single issue of “Your Song”. An early version of “Madman Across the Water”, featuring Mick Ronson on electric guitar, was also recorded during the sessions for the album. It was released on several albums and reissues of Tumbleweed Connection, though the track was ultimately re-recorded for the Madman Across the Water album.

“A loose concept album about the American West, Tumbleweed Connection emphasized the pretensions that always lay beneath their songcraft. Half of the songs don’t follow conventional pop song structures; instead, they flow between verses and vague choruses. These experiments are remarkably successful, primarily because Taupin’s lyrics are evocative and John’s melodic sense is at its best. As should be expected for a concept album about the Wild West, the music draws from country and blues in equal measures, ranging from the bluesy choruses of “Ballad of a Well-Known Gun” and the modified country of “Country Comfort” to the gospel-inflected “Burn Down the Mission” and the rolling, soulful “Amoreena.””
– Stephen Thomas Erlewine (allmusic.com)

Tumbleweed Connection at Spotify:
Please listen to the early version of Madman Across The Water with  Mick Ronson, it’s great! 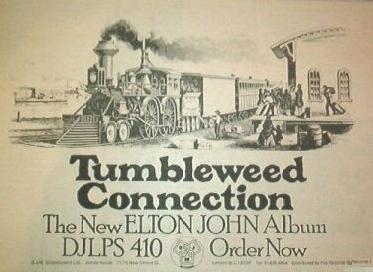 One thought on “October 30: Elton John released Tumbleweed Connection in 1970”