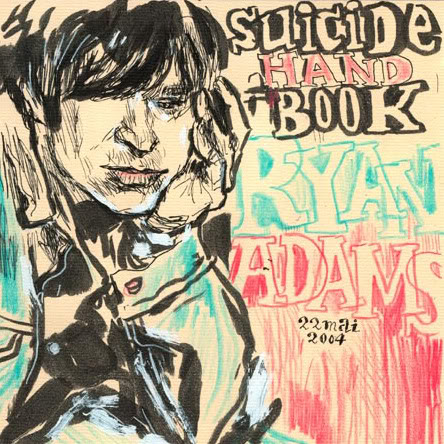 This is Ryan Adams at his saddest, but the songs are ballads of the kind that hurts and feel good at the same time. Some of the tracks from these sessions would later appear on Gold and a few was released on Demolition and one on Easy Tiger. The rest remains  unreleased , but not because they are any weaker than the songs that have been released . There are at least three masterpieces here, and many people have  never heard them!

Suicide Handbook is 21 songs of heartache and anguish but it is, oh, so good!

The whole session is recorded by Ryan Adams and Bucky Baxter. William “Bucky” Baxter  is an American multi-instrumentalist from New Jersey. He has played on various albums by artists such as Bob Dylan, Ryan Adams, Steve Earle, R.E.M., and Joe Henry. He has appeared on three Ryan Adams albums, The Suicide Handbook, Gold and Demolition. On Suicide Handbook he plays some wonderful steel, a bit piano and guitar, and he sings backup vocals.

It’s a shame that the album is unreleased, ok, we can hear that these are demos, but in all their imperfections they are perfect. Adams should release them as they are.

I’ve read somewhere that this album was meant to be a  part of 20:20  (a box set comprised of his unreleased albums, 48 Hours, Pinkhearts,Darkbreaker and Black Hole),  but that was a long time ago…

Suicide Handbook is just as essential as his best official releases.

10 thoughts on “Unreleased – Cracks in a photograph by Ryan Adams”