Bob Dylan was awarded with the special citation on Monday, April 7, making history as the first rock and roll artist to be honored. Singer, songwriter, author, musician, and poet was  recognized for his:

“We didn’t just look up one afternoon and say, ‘Why don’t we give this to Dylan?’  There’s a history there, and a lot of deliberation and effort to figure out who would be truly worthy.”
Sig Gissler, administrator of the Pulitzers.

“There’s something unsettling about Mr. Dylan being awarded a Pulitzer Prize, but why do we want to be settled?”
Christopher Ricks (author, Dylan’s Vision of sin)

Well, he deserved it. Fans, critics and academics have obsessed over his lyrics since the mid 60s. Thanks to him Rock’n Roll got the attention and reckognition worthy of a Pulitzer Prize.

“His songs include countless biblical references and he has claimed Chekhov, Walt Whitman and Jack Kerouac as influences. His memoir, “Chronicles, Volume One,” received a National Book Critics Circle nomination in 2005 and is widely acknowledged as the rare celebrity book that can be treated as literature.”
– Billboard 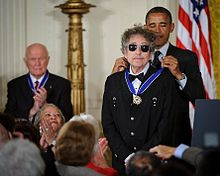 President Barack Obama presents Dylan with a Medal of Freedom