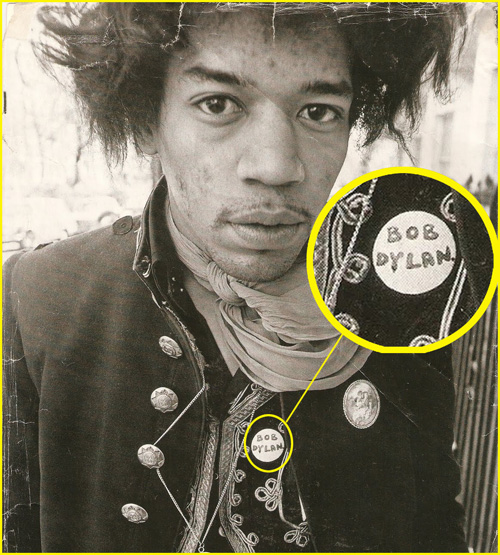 “Sometimes I do a Dylan song and it seems to fit me so right that I figure maybe I wrote it. Dylan didn’t always do it for me as a singer, not in the early days, but then I started listening to the lyrics. That sold me.” – Jimi Hendrix, Beat International 1969

From Seven Ages of Rock (BBC):

“First time I saw him, he was playing with John Hammond. He was incredible then. I’d already been to England and beyond, and although he didn’t sing, I kinda had a feeling that he figured into things. The last time I saw him was a couple of months before he died. He was in that band with Buddy Miles. It was an eerie scene. He was slouched down in the back of a limousine. I was riding by on a bicycle. I remember saying something about that song “Wind Cried Mary,” it was a long way from playing behind John Hammond. That was my favorite song of his – that and “Dolly Dagger”… I don’t know, it was strange, both of us were a little lost for words, he’d gone through like a fireball without knowing it, I’d done the same thing like being shot out of a cannon…” -Bob Dylan (Biograph liner notes)

“I love Dylan. I only met him once, about three years ago, back at the Kettle of Fish on MacDougal Street. That was before I went to England. I think both of us were pretty drunk at the time, so he probably doesn’t remember it.” – Jimi Hendrix, Rolling Stone Magazine

A tender cover of Bob Dylan and The Band‘s classic Tears of Rage from the 4cd set “West Coast Seattle Boy” (Spotify):

“Oh, yeah, I liked that. ‘Help me in my’ — what’s that? That was groovy. I want to do that one”  Jimi Hendrix said. It was recorded in 1970 at Electric Lady Studios, Hendrix’s version, delivered with a funky groove, was first released on the 1974 Loose Ends compilation, and again on the South Saturn Delta collection of demos and alternate tracks.

Can You Please Crawl Out Your Window:

The Jimi Hendrix Experience covered the song for BBC Radio. This version was later released on the BBC Sessions album.

All along the watchtower, Isle of Wight version (the best!):

In the booklet accompanying his Biograph box, Dylan said: “I liked Jimi Hendrix’s record of this and ever since he died I’ve been doing it that way… Strange how when I sing it, I always feel it’s a tribute to him in some kind of way.”

The British magazine Total Guitar deservedly named it top of the list of the greatest cover versions of all time in 2000.