Elvis Presley recorded at least 24 songs at Sun Studio in Memphis, Tennessee between 1953 and 1955. The recordings reflect the wide variety of music that could be heard in Memphis at the time: blues, rhythm & blues, gospel, country & western, hillbilly, and bluegrass. In 2002, the recordings were inducted into the US Congress’s National Recording Registry.

Of the 24 known songs, only 22 survive. Ten were released by Sun as Elvis’ first five singles between 1954 and 1955. With the exception of the first four songs, which were demos recorded at Presley’s expense, all of the songs were produced by Sam Phillips and featured Scotty Moore on guitar and Bill Black on bass.

A year after Presley left for RCA, he had a spontaneous informal session with Carl Perkins, Johnny Cash, and Jerry Lee Lewis when visiting the Sun studio. This meeting was recorded on December 4, 1956, and dubbed the Million Dollar Quartet by the local paper the next day. These sessions are not generally included when reference is made to “Elvis’s Sun Sessions”, however.

Since this is not a Elvis Presley session, I’ve just embedded a youtube video of “The Complete Million Dollar Quartet” release: 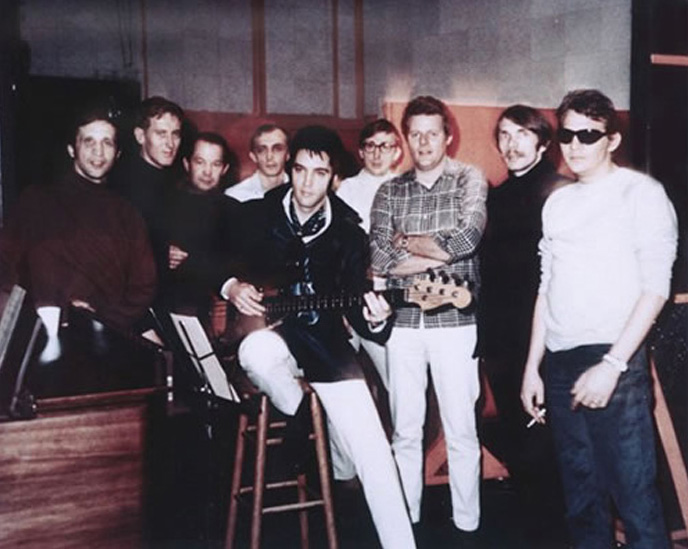 Only weeks after the TV show, Elvis made another crucial decision: He chose not to return to Nashville for his next scheduled round of recording sessions. Felton Jarvis was at Graceland to discuss the sessions, as were members of Elvis’s inner circle, and many of them happened to be connected to a new music scene that was burgeoning right under their noses, in Presley’s own Memphis. Lamar Fike held a position with Hill & Range publishing in Nashville, and now Marty Lacker, George Klein, and Red West all had song-plugging or songwriting arrangements with Chips Moman, the head of Memphis’s American Studio. When Moman had opened the studio he had his eye on a rising trend in rhythm and blues that combined elements of both black and white traditions—the trend that became known as soul. Within a few years he had produced more than a hundred hit singles, including records like “The Letter” by the studio’s own creation the Box Tops as well as others by countless R&B acts and name artists like Neil Diamond and Dusty Springfield. With Stax, Hi, and other independent labels thriving off a sound that synthesized most of the elements Elvis had always responded to in his own music, it was evident that Memphis had overtaken Nashville as the creative hub for recording. At any other time Marty’s suggestion that they forget about Nashville and move to Chips’s little studio at Chelsea and Thomas would almost certainly have been dismissed in Elvis’s usual “someday” fashion, but on this winter night Elvis and Felton withdrew from the dining room to confer, reemerging shortly to announce that they would change the session if arrangements could be made between Chips and RCA.
~Ernst Jørgensen (Elvis Presley: A Life in Music–The Complete Recording Sessions

After a 14-year absence from Memphis, Elvis Presley returned to cut what was certainly his greatest album. .. The result was one of the greatest white soul albums (and one of the greatest soul albums) ever cut, with brief but considerable forays into country, pop, and blues as well. Presley sounds rejuvenated artistically throughout the dozen cuts off the original album, and he’s supported by the best playing and backup singing of his entire recording history.
~Bruce Eder (allmusic.com)

In The Ghetto – original mono master:

After Loving You (alt. version):

“Suddenly, Elvis had to be taken seriously because, suddenly, Elvis was taking the music seriously again. He was expressing his soul, which was plenty deep.”
~Robert Gordon 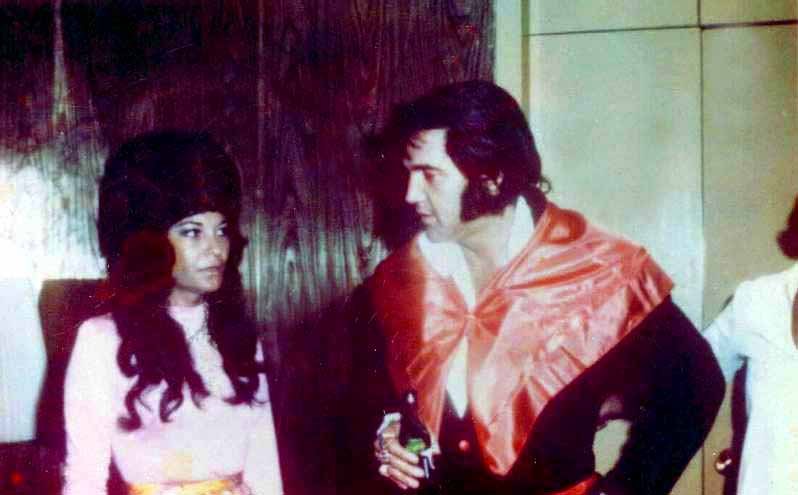 In January of that year, he staged the “Aloha from Hawaii” concert live via satellite, viewed by a billion people worldwide.
But, due to a contractual obligation, he also needed to create new material. He and manager Col. Tom Parker decided that Presley’s beloved Memphis was the place to do it.

The result was two recording sessions at Stax Records, the influential studio where Otis Redding, Isaac Hayes, Sam & Dave and others created the “Memphis soul” sound in the 1960s and early 1970s.

Presley’s sessions in July and December 1973 produced country, R&B and pop songs that were released in three separate albums.
~billboard.com

Good Time Charlie’s Got the Blues:

A Live album based on his performance is released July 7, 1974. 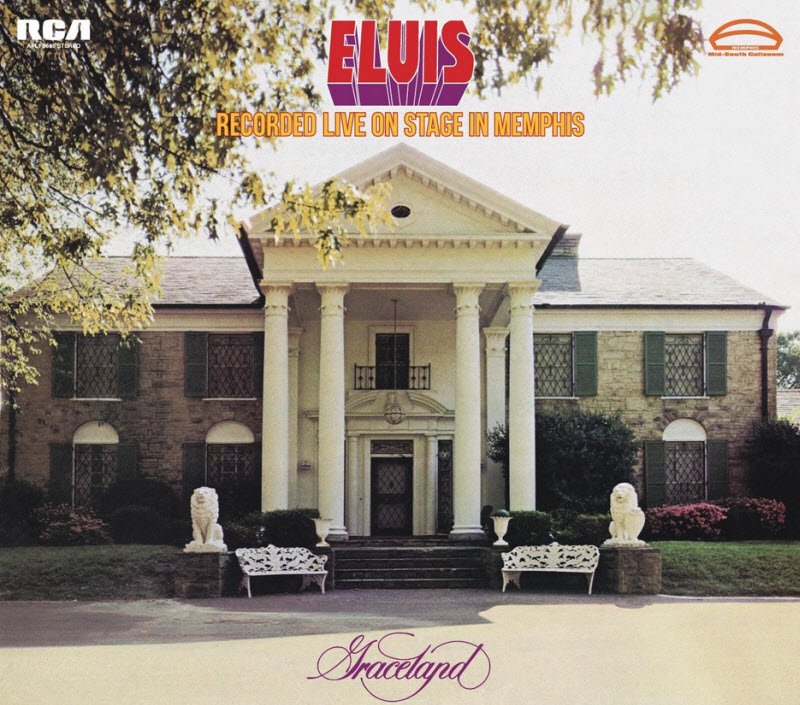 The original release of this concert in 1974 had several songs cut from the track listing, due to spatial limitations on the vinyl disc.

–
There’s been bootlegs and a FTD release, but finally in March 2014 we got “Elvis Recorded Live On Stage In Memphis Legacy edition“. This release with upgraded sound also includes the March 18 concert. 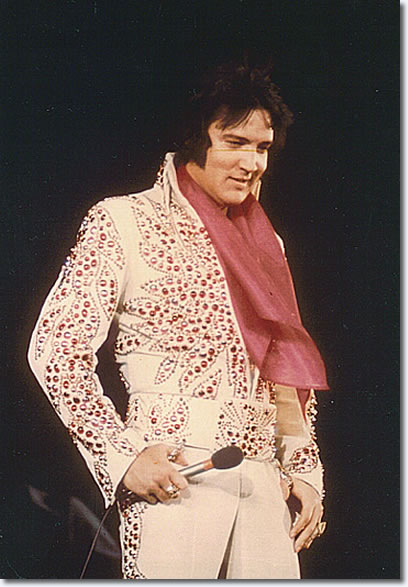 Elvis rarely ventured out of Graceland in 1976 apart from his touring commitments. Since he couldn’t be bothered to enter a recording studio, RCA brought the studio to him and set up a mobile recording studio in his now-legendary Jungle Room. During February and October of that year, Elvis recorded some of his most heartbreaking material to date, as well as some rollicking good tunes, all in the comfort of his own home.
~Steve “Spaz” Schnee  (allmusic.com)

She thinks I Still Care: 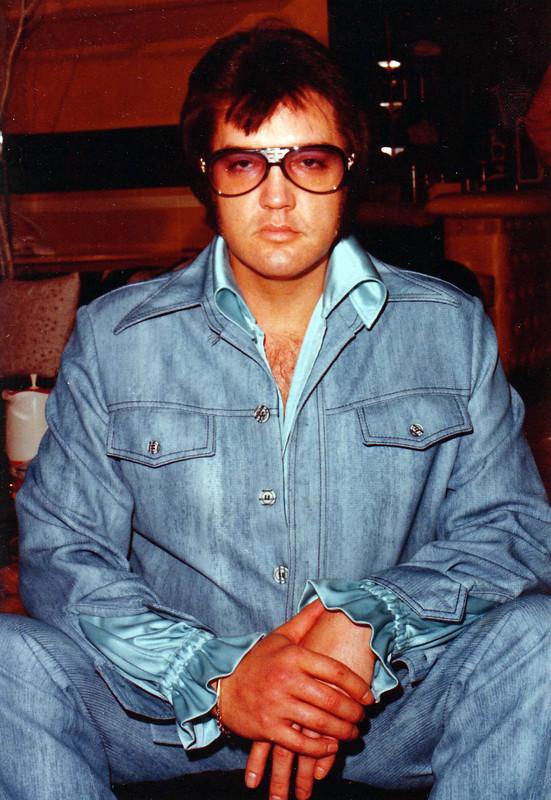 One thought on “Elvis Presley recording history in Memphis”