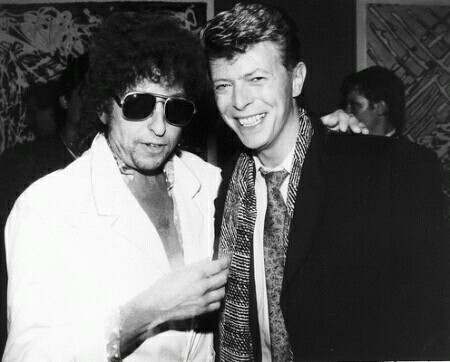 “His albums have a great class to them, even those albums where he is actually playing songs of long-dead blues singers. His writing, his song texts, leave me speechless. “
– David Bowie (about Bob Dylan, 1997)

David Bowie always talked about Dylan with great respect. Bob Dylan was maybe not the biggest influence on his music, but he did sing some of his songs both live and in studio. I found some fine versions of, Like a Rolling Stone, Maggie’s Farm and Trying to get to heaven. Mick Ronson a long-time Bowie friend and collaborator was also a part of Dylan’s Rolling Thunder tour.

Bowie also played Don’t think twice it’s all right and She belongs to me (I’ve read somewhere) but I could not find an upload of them anywhere.

Trying to get to heaven
Recorded during the mixing sessions for Earthling in 1998.

Bowie’s version of “Tryin’ to Get to Heaven” (which, at least in its circulating edit, cuts Dylan’s second verse and squeezes the fourth and fifth into one incoherent lump) is, essentially, a first draft of what would become Hours. The take begins somber and ashen enough. Yet the circularity of Dylan’s singing on “Tryin’”, conveying a journey undertaken but never in danger of ending, seemed to frustrate Bowie: he needed a narrative.

So in the “people on platforms” verse, Bowie builds to a manic desperation, as if he has to make an eleventh-hour sale or he’ll be sacked by his proprietor. We get a rattled “cha-hay-hay-hain,” a squeaked-out “looose,” the creaking onomatopoeia of “cloowwoose the door,” and a gargle. Having made a hash of Dylan’s last verses, Bowie latches onto a line as if he’d drawn it by lot to torture: “I’ve beeen! to Sugar Town-I shook! the su!gar down!” Dylan sang those words with an earned swagger, like a spendthrift man recalling a spent-out life. Bowie sang them as if he was just passingly familiar with the English language.
– Pushing ahead of the Dame

Maggie’Farm (live) – Tin Machine
“Maggie’s Farm” was recorded by Tin Machineat La Cigale, Paris, on 25 June 1989 and was released as a double-A-sided single with “Tin Machine” in September the same year: 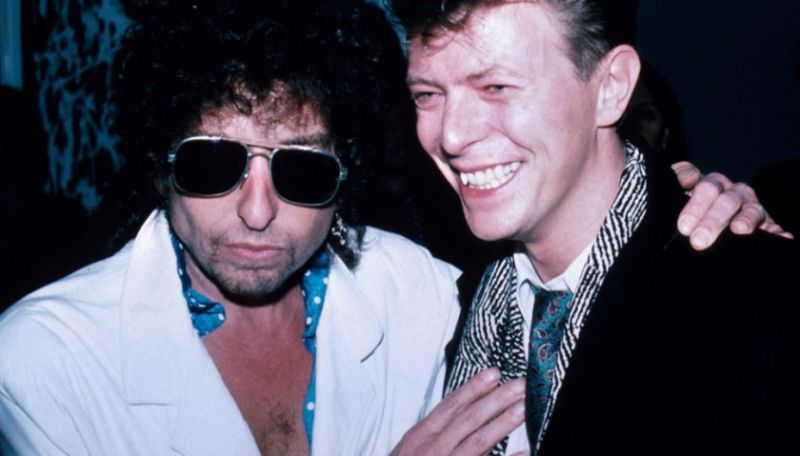 Like a Rolling Stone – Mick Ronson/David Bowie.
David Bowie learnt that Mick Ronson was making a new solo record in 1992,  Heaven and Hull. Bowie sent a box of tapes to Ronson. Mick Ronson was not very happy with the songs he got, with the only remotely ok track being David Bowie’s version of Bob Dylan’s “Like a Rolling Stone,” which hailed from one of his creative lows, the demo sessions with Bryan Adams’s band, 1988. Ronson overdubbed as much guitar as the tape could take. I think it turned out “ok’ish”:

“He was just. . .there, he’d play what he wanted to play. He’d come in and do his numbers. He did what he had to do and he did it well and quickly. He maybe wouldn’t get too involved otherwise. I mean, he wasn’t pulling any big star trip. He doesn’t have to. He doesn’t have to say anything. With Bob, you just know. If there was something he was looking for in a song, you’d try to find it without being told. And that’s the thing about Dylan. I’d follow him anywhere, no questions asked. That whole tour was this huge, huge adventure. A real treasure hunt. There was Joan Baez. McGuinn. Ginsberg – he’s a grand lad, is Allen. There was Dylan. And there I was, too. For a lad from Yorkshire like meself, it were truly out of this world.”
– Mick Ronson about Bob Dylan and The Rolling Thunder tour (Uncut)