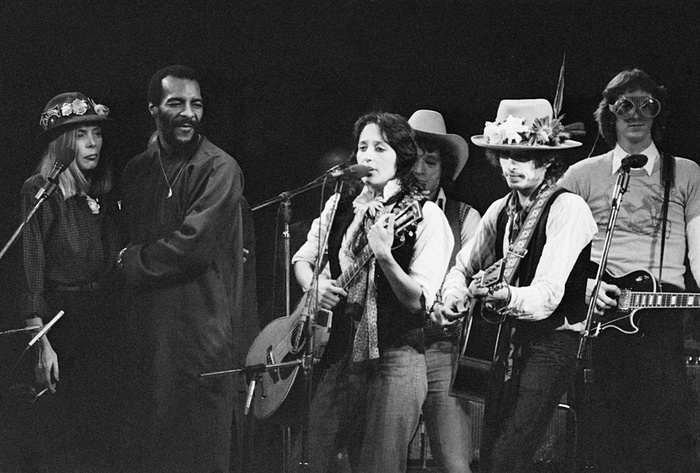 Richie Havens has covered many Bob Dylan songs, here are those I managed to dig up.

–
Here is a sublime performance by Richie Havens. Watch him segue way from Van Morrison’s Tupelo Honey into a fantastic version of Bob Dylan’s Just Like A Woman: 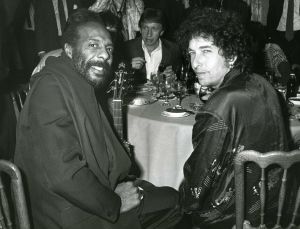 The Times They are A-changin’:

It’s all over now, Baby blue:

Sad Eyed Lady of the Lowlands:

“I remember going into Folk City and walking through the people peering over the partition at the performer on stage. It was Johnny Herald playing away — lots of fiddles and guitars. I usually didn’t linger too long in the bar area, so I went down the stairs to the basement where we shared a common closet.
I took my guitar out of the large bath towel it lived in for protection and began tuning it. Casey Anderson stood outside in the cellar singing “Lily of the West” and Tex Konig stood looming in the wings with his guitar dwarfed by his gentle giant size. I was on next and had to pass through the horde of  folk singers and up the stairs to the dark corner to wait my turn.

This was only the second time I played the room and it was really exciting for me because I was actually being heard by people who liked my music… well, not really my music, because it was a Bob Dylan song I was singing when I hit the stage. I didn’t even know it at the time — all I knew was that it was a great song and it truly expressed what I personally felt when I heard it (and I only sang songs that moved me personally).

And after singing a song that I learned from a friend (Gene Michaels) called “A Hard Rain’s A-Gonna Fall”, I remembered sitting in the living room of the dorm-like hotel suite he and I shared with a group of nuts from the midwest (who were called the Tanners — a folk trio that turned me on to M. C. Escher, who turned me on…).

Well, there I was in the living room trying to learn this new song, “A Hard Rain”. It took me three days — the hardest song I ever learned. Images, lots of them, of a truth so subliminally obvious that you had to live the song to sing the song (as with all Dylan songs). So, when I finished the song and headed downstairs to the crowded telephone booth-sized dressing room, a guy stopped me on the stairs to tell me it was the best he’d ever heard the song sung. I said, “Thanks”, and continued on down.

Tex, or someone down there, asked me if I knew that the guy talking to me on the stairs was BOB DYLAN, who wrote the song? Now it all came clear! I’d been singing the song for two years thinking that Gene Michaels wrote it! And, that’s how I first met Bob Dylan, in 1963.”

Tombstone Blues (from the i’m Not There Soundtrack):

If not for you:

I could not find: