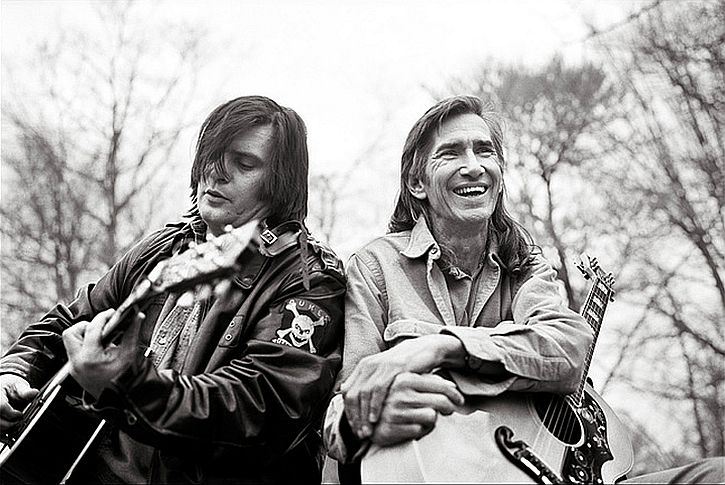 ..You know, Dylan didn’t even talk to me for the whole first month we were on the road. I thought that’s how it was going to be, but he eventually started talking to me, the way that Dylan talks. We talked a lot after that, but did we ever have a conversation? I think not. [laughs] I don’t think that’s what it is. A lot of it has to do with my ideas about Bob Dylan. He’s fuckin’ Bob Dylan and I’m Steve Earle. We’re going to communicate differently, and what I think about Bob Dylan is as much who I am, just because of my job, what I do. I am who I am as much because of Bob Dylan as anybody. Just like what we had talked about Townes [Van Zandt]. Townes was fully aware that Bob Dylan invented his job. Make no mistake about that. I am, too.
~Steve Earle (pitchfork interview 2007)

“About 2:30 in the morning, Townes walked in, It was the first time I’d ever been in an environment with him where we weren’t separated by a microphone. And he had on this beautiful buckskin jacket. And Townes started a craps game and lost every dime that he had. And that jacket. Within 15 minutes. And I thought, ‘My hero.’ ”
~Steve Earle (npr music)

Steve Earle has covered Townes Van Zandt many times, even release an album with cover songs (“Townes” in 2009). Here is a collection of videos I found on youtube – Great stuff!