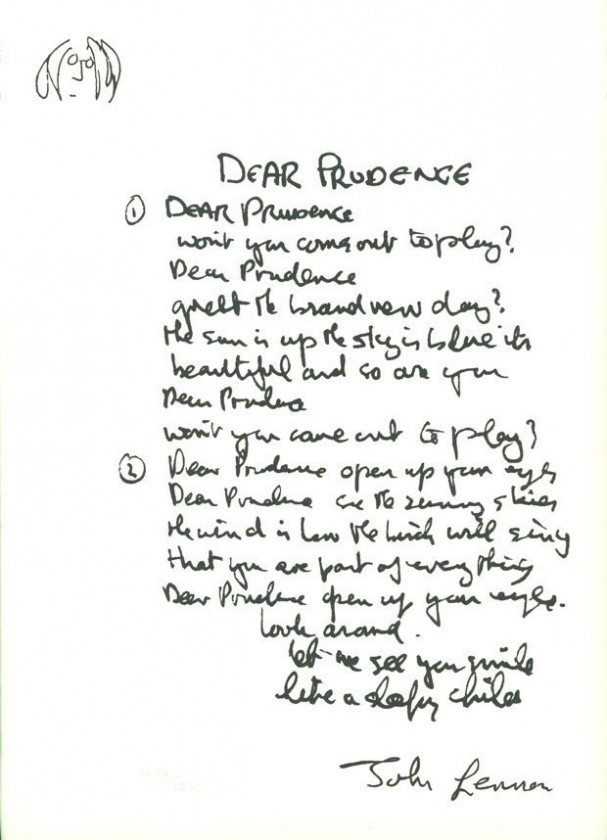 “Dear Prudence” is a song written by John Lennon, and credited to Lennon–McCartney. It was released by the Beatles as the second track on their 1968 double-disc album entitled The Beatles, commonly known as The White Album. The subject of the song is Prudence Farrow, actress Mia Farrow’s sister, who was present when the Beatles went to India to study with Maharishi Mahesh Yogi.

John Lennon was asked to “contact her and make sure she came out more often to socialize”. As a result, Lennon wrote the song “Dear Prudence”. In the song Lennon asks Farrow to “open up your eyes” and “see the sunny skies” reminding her that she is “part of everything”. The song was said to be “a simple plea to a friend to ‘snap out of it'”. Lennon said later that “She’d been locked in for three weeks and was trying to reach God quicker than anyone else”.

Dear Prudence is me. Written in India. A song about Mia Farrow’s sister, who seemed to go slightly barmy, meditating too long, and couldn’t come out of the little hut that we were livin’ in. They selected me and George to try and bring her out because she would trust us. If she’d been in the West, they would have put her away.
– John Lennon

Prudence Farrow:
“I would always rush straight back to my room after lectures and meals so I could meditate. John, George and Paul would all want to sit around jamming and having a good time and I’d be flying into my room. They were all serious about what they were doing, but they just weren’t as fanatical as me”. 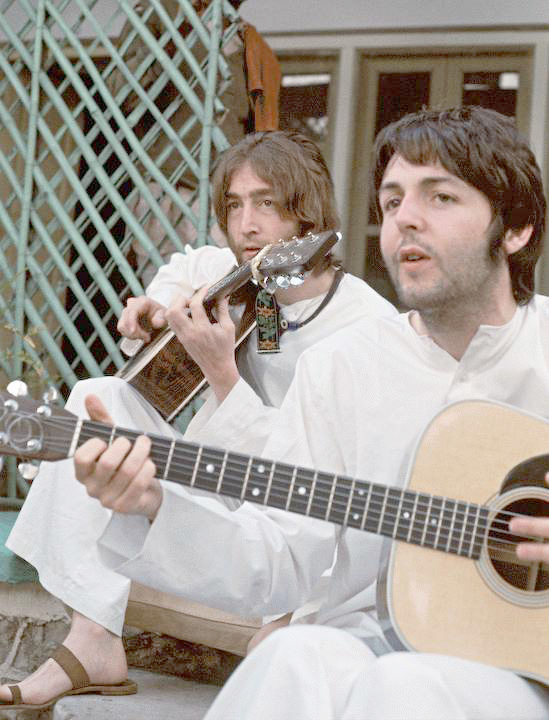 They recorded the song at Trident Studios in London on 28, 29 and 30 August 1968. Utilising state-of-the-art eight-track recording equipment, the basic track included finger picking guitar performed by John Lennon as well as George Harrison on the lead guitar, plus Paul McCartney playing the drums in place of Ringo Starr, who had temporarily left the Beatles.

The next day, McCartney performed and recorded the bass track and Lennon recorded additional layers to his vocals. Handclapping, cowbell and tambourine were then added by Harrison and McCartney. On the last day of the recording session, piano and flügelhorn tracks were recorded by McCartney (August 30).

They only recorded one take(!) the sophisticated equipment made it possible to put the song together instrument by instrument. The bad instrument takes were erased as they went along.

Recorded, like Hey Jude, on the eight-track at Trident Studios, this was the second song the group taped in Starr’s absence. Filling in for him, McCartney is unsteady in the first half and his hi-hat work is stiff) but his continuous fill through the last verse/chorus brings the performance to a cathartic climax. The richest ingredient is Harrison’s ‘Indian’ guitar, his first use of this once ubiquitous style since The Inner Light, recorded six months earlier.
~Ian Macdonald (Revolution in the Head: The Beatles’ Records and the Sixties