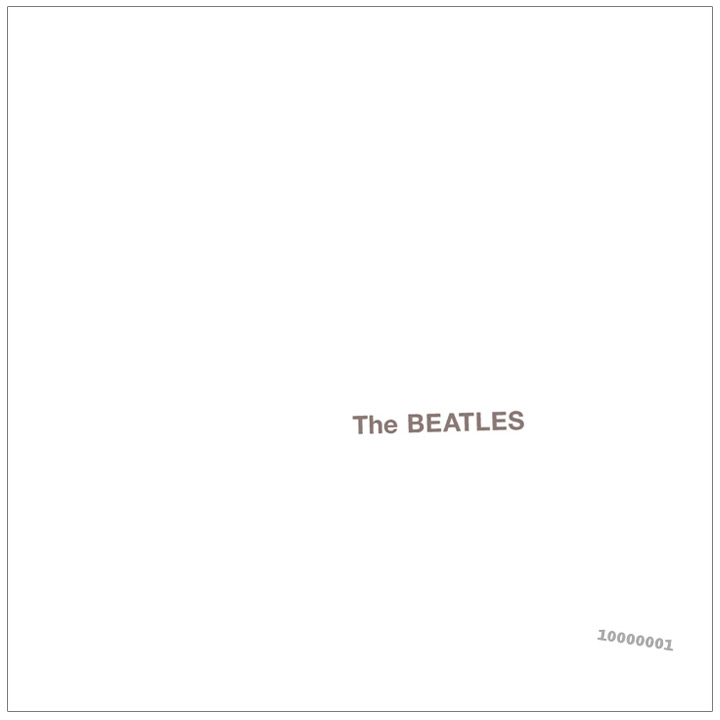 I rank this as the third best Beatles album, and it is of course a rock masterpiece.

When I coverted to CDs this was my very first purchase, I love it!

The Beatles is the ninth official album by the Beatles, a double album. It is commonly known as the “White Album” as it has no graphics or text other than the band’s name embossed (and, on the early LP and CD releases, a serial number) on its plain white sleeve.

The album was written and recorded during a period of turmoil for the group, after visiting the Maharishi Mahesh Yogi in India and having a particularly productive songwriting session in early 1968. Returning to the studio, the group recorded from May to October 1968, only to have conflict and dissent drive the group members apart. Ringo Starr quit the band for a brief time, leaving Paul McCartney to play drums on two tracks. Many of the songs were “solo” recordings, or at least by less than the full group, as each individual member began to explore his own talent.

Why don’t we do it in the road:

Upon release in November 1968, the album received near universal acclaim and reached number 1 on the charts in the United Kingdom and the United States. The album is notable for the eclectic nature of its songs, which has divided critics in evaluating its legacy. The album has sold over 30 million copies worldwide and was listed at number 10 on Rolling Stone’s “500 Greatest Albums of All Time” list. Previously in 1987, as part of their 20th anniversary, Rolling Stone magazine ranked it #9 on “The 100 Best Albums of the Last Twenty Years.” (wikipedia)

Each song on the sprawling double album The Beatles is an entity to itself, as the band touches on anything and everything it can. This makes for a frustratingly scattershot record or a singularly gripping musical experience, depending on your view, but what makes the so-called White Album interesting is its mess. Never before had a rock record been so self-reflective, or so ironic; the Beach Boys send-up “Back in the U.S.S.R.” and the British blooze parody “Yer Blues” are delivered straight-faced, so it’s never clear if these are affectionate tributes or wicked satires. Lennon turns in two of his best ballads with “Dear Prudence” and “Julia”; scours the Abbey Road vaults for the musique concrète collage

Revolution (most like the Hey Jude B-side, but hell, we take what we get):

“Revolution 9”; pours on the schmaltz for Ringo’s closing number, “Good Night”; celebrates the Beatles cult with “Glass Onion”; and, with “Cry Baby Cry,” rivals Syd Barrett. McCartney doesn’t reach quite as far, yet his songs are stunning — the music hall romp “Honey Pie,” the mock country of “Rocky Raccoon,” the ska-inflected “Ob-La-Di, Ob-La-Da,” and the proto-metal roar of “Helter Skelter.” Clearly, the Beatles’ two main songwriting forces were no longer on the same page, but neither were George and Ringo. Harrison still had just two songs per LP, but it’s clear from “While My Guitar Gently Weeps,” the canned soul of “Savoy Truffle,” the haunting “Long, Long, Long,” and even the silly “Piggies” that he had developed into a songwriter who deserved wider exposure. And Ringo turns in a delight with his first original, the lumbering country-carnival stomp “Don’t Pass Me By.” None of it sounds like it was meant to share album space together, but somehow The Beatles creates its own style and sound through its mess.


Since there’s so little live footage , let us include some Beatle solo tracks, originally on the album. All three are so brilliant it hurts!

While my guitar gently weeps, George Harrison with Ringo on drums and with the help of God on guitar (as he also did on “The White Album”):