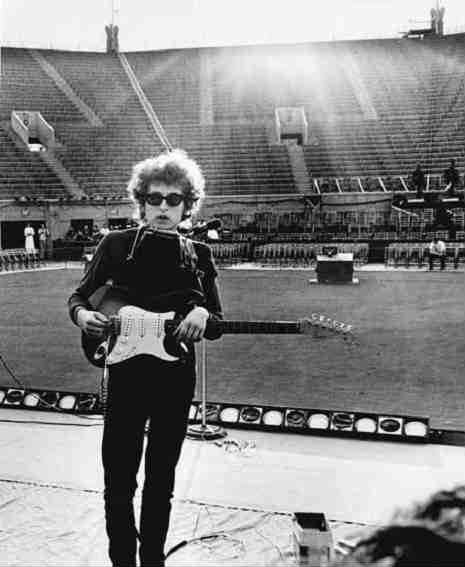 I think this is Dylan’s greatest concert. That’s a pretty audacious thing to say, considering the vast body of live work that Dylan has presented to us throughout the years, but I really hear something special and truly magnificient in this, his first concert to feature a full electric set. It’s a shame that there isn’t a better tape of this event, but until an as yet undiscovered PA tape comes to light, this will have to do.
~punkhart.com

This time Dylan is determined to be prepared, and after arduous rehearsals with his new band, soundchecks with them on the afternoon of the concert. Although the weather is cold and windy, he has succeeded in selling out 15 ,000 seats. The format presented at this show is to remain constant throughout the next nine months of touring. The 45-minute opening set features Dylan solo, just guitar and harmonica, followed by a similar-length electric set with the band. The acoustic sec he presents is a tour de force of some of his finest writings: “She Belongs to Me,” “To Ramona,” “Gates of Eden,” “Love Minus Zero/No Limit,” and his new 11-minute composition, “Desolation Row.” He finishes with the same two songs performed solo at Newport: “It’s All Over Now, Baby Blue” and “Mr. Tambourine Man.” After the intermission Dylan returns with “an excellent rock & roll quartet” (Shelton observes in The New York Times), and launches straight into “Tombstone Blues.” As if determined to compound the audience’s confusion, half of the songs in the electric set are wholly new, and lyrically dense. “Tombstone Blues,” “From a Buick Six,” “Just Like Tom Thumb’s Blues,” and “Ballad of a Thin Man” all receive their first public airings. “I Don’t Believe You” and “It Ain’t Me, Babe” are both rocked up. “Maggie’s Farm” and “Like a Rolling Stone” remain from the Newport sec. A large contingent in the audience boo throughout the second half, and Dylan quickly exits the stage after “Like a Rolling Stone.”
~Clinton Heylin (Bob Dylan: A Life in Stolen Moments Day by Day 1941-1995