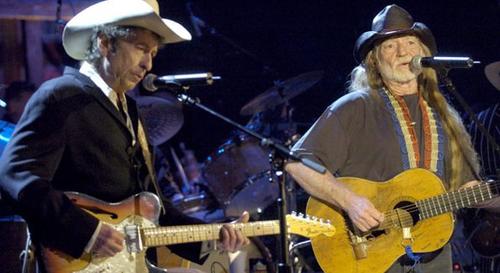 [blockquote cite=”Mr. WordPress” type=”left, center, right”]He’s [Willie Nelson] like a philosopher, you know. He gets to the heart of it in a quick way, gets it out and it’s over. And this leaves the listener to think about it.
~Bob Dylan (28 April 1993).[/blockquote]

Celebrating Willie Nelson’s 81st birthday… I’ve put together 4 videos where he’s on stage with Bob Dylan (and a bonus..one)

(a brilliant) Pancho And Lefty:

His [Willie Nelson] guitar playing is really, you know, pretty phenomenal. I don’t really see anybody giving him any credit as a musician, but in my book he’s up there on top.
~Bob Dylan (28 April 1993)

..as.. somebody obviously stole the sound from Bob’s mic… we need to compensate:

(again a brilliant) Hard Times (not with Nelson, but still…):