I never wanted to write topical songs,…. Have you heard my last two records, Bringing It All Back Home and Highway 61? It’s all there. That’s the real Dylan.
~Bob Dylan (to Frances Taylor – Aug 1965)

If you had to sum up Highway 61 Revisited in a single sentence, suffice it to say that it is the album that invented attitude and raised it to an art form. Just take a look at the cover. Nobody from Johnny Rotten to Eminem has done it better to this day.
~Nigel Williamson (The Rough Guide To Bob Dylan)

Wikipedia:
To create the material for Highway 61 Revisited, Dylan spent a month writing in his new home in the Byrdcliffe artists’ colony of Woodstock in upstate New York. When he returned to Studio A on July 29, he was backed by the same musicians as the previous session, but his producer had changed from Wilson to Johnston.

Their first session together was devoted to three songs. After recording several takes each of “Tombstone Blues”, “It Takes a Lot to Laugh” and “Positively 4th Street”, masters were successfully recorded. “Tombstone Blues” and “It Takes a Lot to Laugh” were included in the final album, but “Positively 4th Street” was issued as a single-only release. At the close of the July 29 session, Dylan attempted to record “Desolation Row”, accompanied by Al Kooper on electric guitar and Harvey Brooks on bass. There was no drummer, as the drummer had gone home. This electric version was eventually released in 2005, on The Bootleg Series Vol. 7. 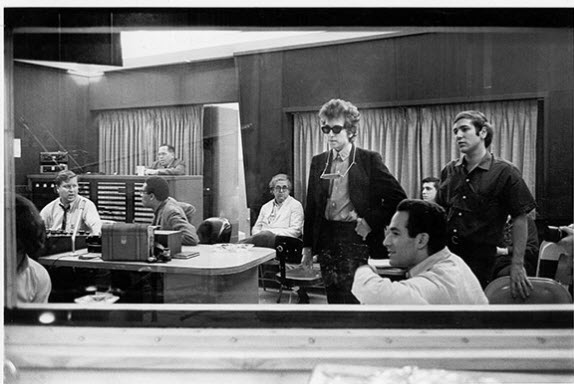