He left the rehearsals with the intent of not coming back, but then he stumbled into a show with a Jazz band on his way to the hotel.

“…he (the singer) was relaxed, but sang with natural power. Suddenly and without warning, it was like the guy had an open window to my soul. It was like he was saying, “You should do it this way.” All of a sudden, I understood something faster than I ever did before. I could feel how he worked at getting his power, what he was doing to get at it. I knew where the power was coming from and it wasn’t his voice, though the voice brought me sharply back to myself. I used to do this thing, I’m thinking. It was a long time ago and it had been automatic. No one had ever taught me. This technique was so elemental, so simple and I’d forgotten it. It was like I’d forgotten how to button my own pants. I wondered if I could still do it. I wanted at least a chance to try. If I could in any way get close to handling this technique, I could get off this marathon stunt ride.”

Bob Dylan returned to the rehearsal.

This is just as much a Grateful Dead bootleg as a Bob Dylan bootleg, and it’s big, almost 5 hours. It has been “released” on several boots over the years but I think that the discs that were donated to Archive.org from Alan Fraser directly from the soundboard has the best sound. The highlight for me is fantastic country version of Tomorrow is a long time (track 26), heartbreakingly good! Another highlight is Dylan’s singing on The Wicked Messenger (track 50, just beautiful.

I love the way we are allowed to witness Dylan and The Dead find a common footing.

“In late March and early April of 1987, Dylan and the Dead gather at Club Front in San Rafael California to rehearse numbers for the upcoming July tour. This great recording is the end result…  there is some great material here for fans of studio outtakes.”
– Bobsboots 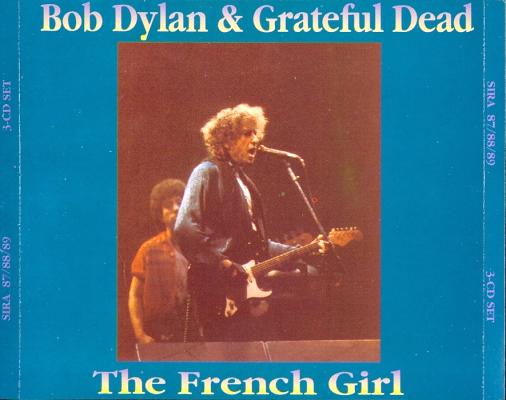 From the Internet Archive:

Complete rehearsals for the summer ’87 tour when Bob Dylan sang as part of the Grateful Dead.

This 6-cd set, donated by Alan Fraser, documents all the known Dylan and Dead rehearsals from the Club Front in San Rafael, CA (June 1987) in incredible sound quality. All the songs come from soundboard cassette masters transferred to DAT, then CD-R.

The layout of the set is as follows:

From the eminent Internet Archive:

“Returning to The Dead’s rehearsal hall as if nothing had happened, I picked it up where we had left off, couldn’t wait to get started — taking one of the songs that they wanted to do, seeing if I could sing it using the same method that the old singer used. I had a premonition something would happen. At first it was hard going, like drilling through a brick wall. All I did was taste the dust. But then miraculously something internal came unhinged. In the beginning all I could get out was a blood-choked coughing grunt and it blasted up from the bottom of my lower self, but it bypassed my brain. That had never happened before. It burned, but I was awake. The scheme wasn’t sewed up too tight, would need a lot of stitches, but I grasped the idea. I had to concentrate like mad because I was having to maneuver more than one stratagem at the same time, but now I knew I could perform any of these songs without them having to be restricted to the world of words. This was revelatory. I played these shows with The Dead and never had to think twice about it. Maybe they just dropped something in my drink, I can’t say, but anything they wanted to do was fine with me. I had that old jazz singer to thank.”
– Bob Dylan (Chronicles Vol1)

One thought on “My Favourite Bob Dylan Bootleg 1987: with Grateful Dead at The Club Front”