Ah get born, keep warm
Short pants, romance, learn to dance
Get dressed, get blessed
Try to be a success
Please her, please him, buy gifts
Don’t steal, don’t lift
Twenty years of schoolin’
And they put you on the day shift

Question: Do you think there’s a move afoot to turn you into a pop star?
Dylan: They can’t turn me into anything. I just write my songs and that’s that! Nobody can change me and by the same token, they can’t change my songs. Of course I vary things once in a while, like with the different backing I had on Subterranean Homesick Blues. But that was entirely my own doing. Nobody talked me into it. Just so happened we had a lot of swinging cats on that track, real hip musicians.
~Bob Dylan (May 1965, UK)

Subterranean Homesick Blues. I mean… I don’t think I would have wanted to do it all by myself. I thought I’d get more power out of it, you know, with a small group in back of me. It
was electric, but doesn’t necessarily mean that it’s modernized just because it’s electric, you know? It was, you know, like a… Country music was electric, too.
Bob Dylan (Jeff Rosen Interviews, 2005)

If Dylan like Shakespeare is to be someday remembered for having created combinations of language that “age cannot wither,” “Subterranean Homesick Blues” will be a shining example thereof.
~Paul Williams (Bob Dylan Performing Artist I: The Early Years 1960-1973

Subterranean Homesick Blues” was electric all the way down to its obvious R & B roots. No traditional ballad provided this song with its underlying infrastructure. Acoustic or electric, it had been taken at quite a different clip from any folk ballad—or, indeed, the southern boogie Chuck Berry utilized when devising the template on April 16, 1956. And Dylan would be the last to deny Berry’s overt influence. As he told Hilburn recently, this first foray into folk-rock was “from Chuck Berry, a bit of ‘Too Much Monkey Business,’ and some of the scat songs of the forties.
~Clinton Heylin (Revolution in the Air: The Songs of Bob Dylan, 1957-1973 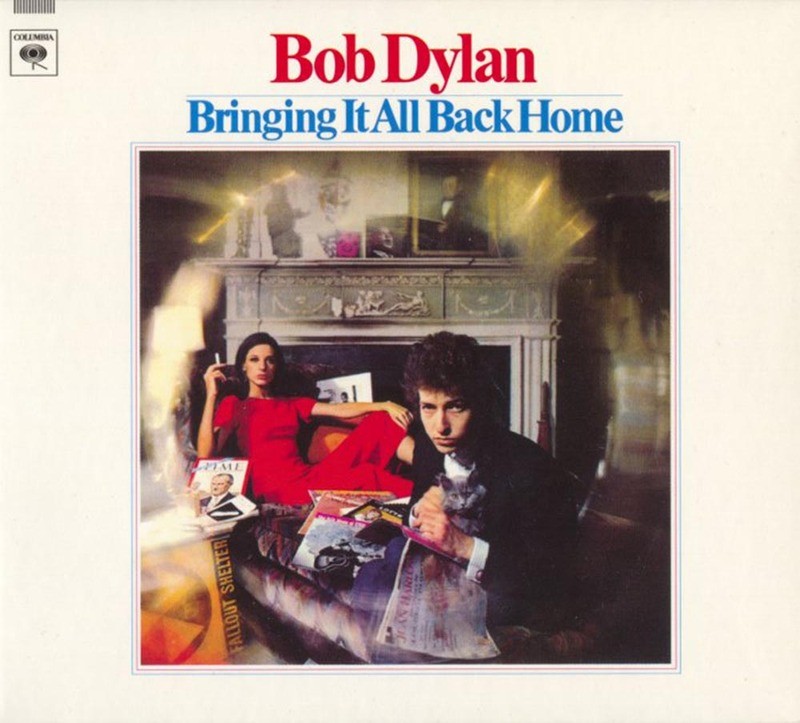 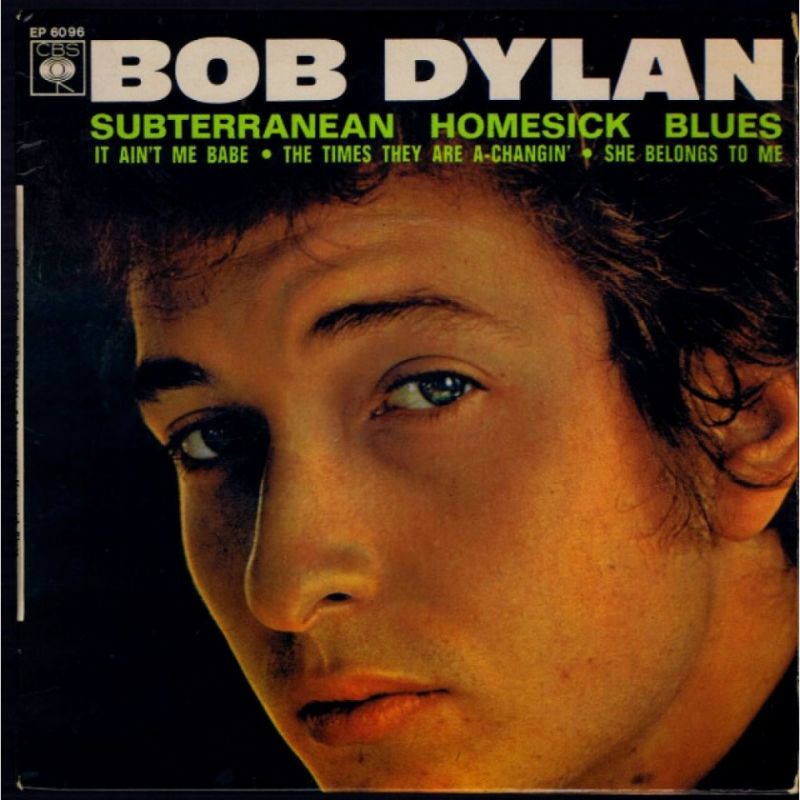 “Subterranean Homesick Blues” is a song by Bob Dylan, recorded on January 14, 1965, and released as a single on Columbia Records, catalogue 43242, on March 8. It appeared some two weeks later as the lead track to the album Bringing It All Back Home. It was Dylan’s first Top 40 hit in the U.S., peaking at #39 on the Billboard Hot 100. It also entered the Top 10 on the singles chart in the United Kingdom. The song has subsequently been reissued on numerous compilations, the first being his 1967 singles compilation Bob Dylan’s Greatest Hits. One of Dylan’s first ‘electric’ pieces, “Subterranean Homesick Blues” was also notable for its innovative film clip, which first appeared in D. A. Pennebaker’s documentary, Dont Look Back.

An acoustic version of the song, recorded the day before the single, was released on The Bootleg Series Volumes 1–3 (Rare & Unreleased) 1961–1991.

“Subterranean Homesick Blues” was, in fact, an extraordinary three-way amalgam of Jack Kerouac, the Guthrie/Pete Seeger song “Taking It Easy” (‘mom was in the kitchen preparing to eat/sis was in the pantry looking for some yeast’) and the riffed-up rock’n’roll poetry of Chuck Berry’s “Too Much Monkey Business”
~Uncut Magazine (Jan 2005)

Dylan has also stated that when he reached the University of Minnesota in 1959, he fell under the influence of the Beat scene: “It was Jack Kerouac, Ginsberg, Corso and Ferlinghetti.” Kerouac’s The Subterraneans, a novel published in 1958 about the Beats, has been suggested as a possible inspiration for the song’s title. 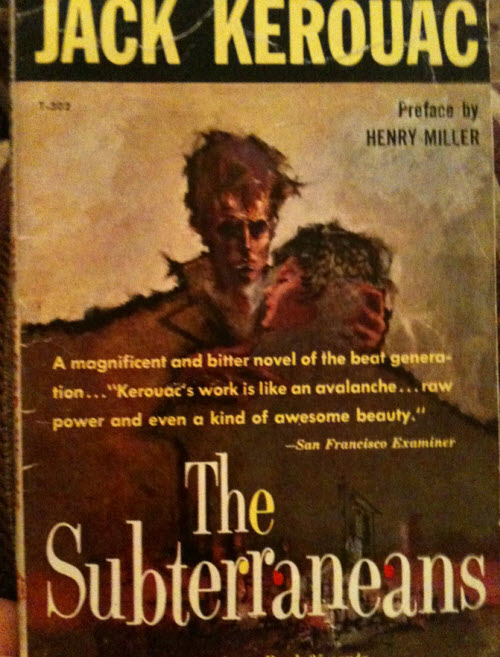 The song’s first line is a reference to codeine distillation and politics of the time: “Johnny’s in the basement mixing up the medicine / I’m on the pavement thinkin’ about the Government”. The song also depicts some of the growing conflicts between “straight” or “square” (40-hour workers) and the emerging 1960s counterculture. The widespread use of recreational drugs, and turmoil surrounding the Vietnam War were both starting to take hold of the nation, and Dylan’s hyperkinetic lyrics were dense with up-to-the-minute allusions to important emerging elements in the 1960s youth culture.

Better stay away from those / That carry around a fire hose 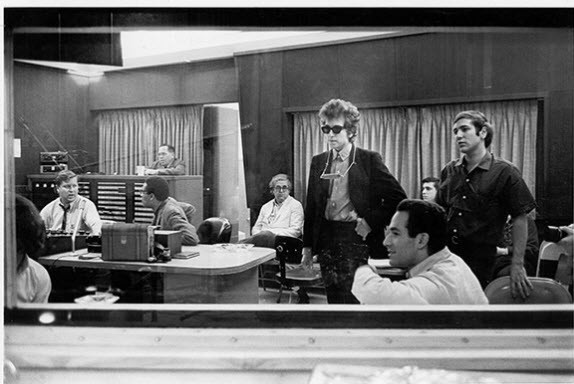 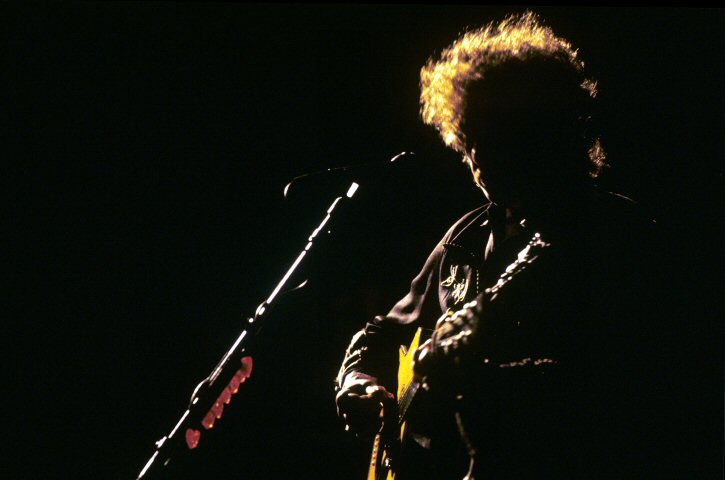 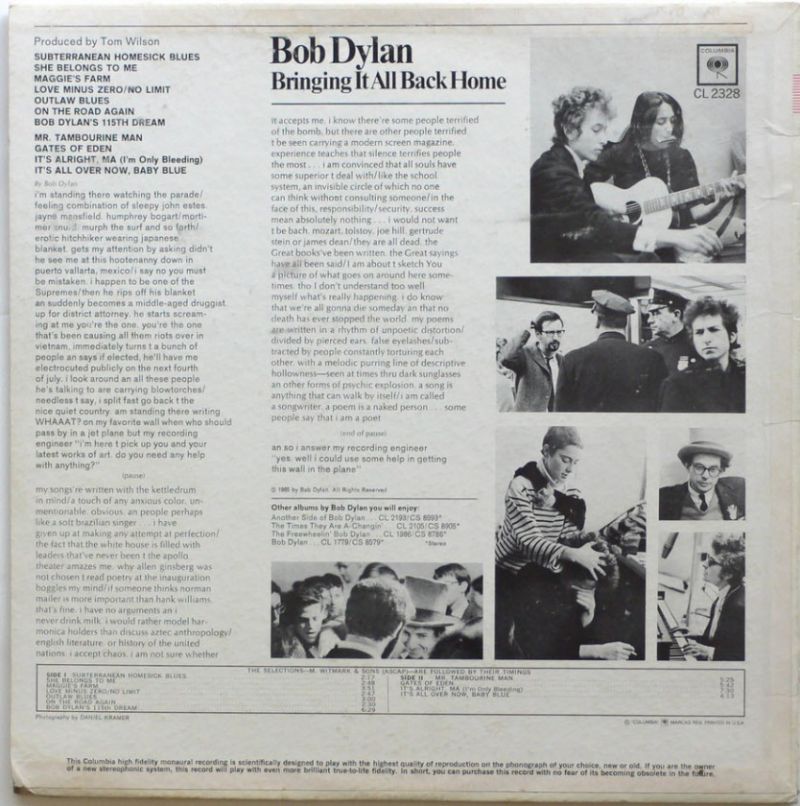 Johnny’s in the basement
Mixing up the medicine
I’m on the pavement
Thinking about the government -1
The man in the trench coat
Badge out, laid off
Says he’s got a bad cough -2
Wants to get it paid off
Look out kid
It’s somethin’ you did
God knows when
But you’re doin’ it again
You better duck down the alley way
Lookin’ for a new friend
The man in the coon-skin cap
In the pig pen -3
Wants eleven dollar bills
You only got ten

Maggie comes fleet foot
Face full of black soot
Talkin’ that the heat put
Plants in the bed but
The phone’s tapped anyway
Maggie says that many say
They must bust in early May
Orders from the D.A.
Look out kid
Don’t matter what you did
Walk on your tiptoes
Don’t try “No-Doz”
Better stay away from those
That carry around a fire hose
Keep a clean nose
Watch your plain clothes -4
You don’t need a weatherman
To know which way the wind blows

Get sick, get well
Hang around a ink well
Hang bell, hard to tell -5
If anything is goin’ to sell
Try hard, get barred
Get back, write braille
Get jailed, jump bail
Join the army, if you fail
Look out kid
You’re gonna get hit
But users, cheaters
Six-time losers
Hanging round the theaters -6
Girl by the whirlpool
Lookin’ for a new fool
Don’t follow leaders
Watch your parkin’ meters -7

Oh, to get born, keep on -8
Short pants, romance, learn to dance
Get dressed, get blessed
Try to be a success
Please her, please him, buy gifts
Don’t steal, don’t lift
Twenty years of schoolin’
And they put you on the day shift
Look out kid
They keep it all hid
Better jump down a manhole
Light yourself a candle
Don’t wear sandals
Try to avoid the scandals
Don’t wanna be a bum
You better chew gum -9
The pump don’t work
’Cause the vandals took the handles