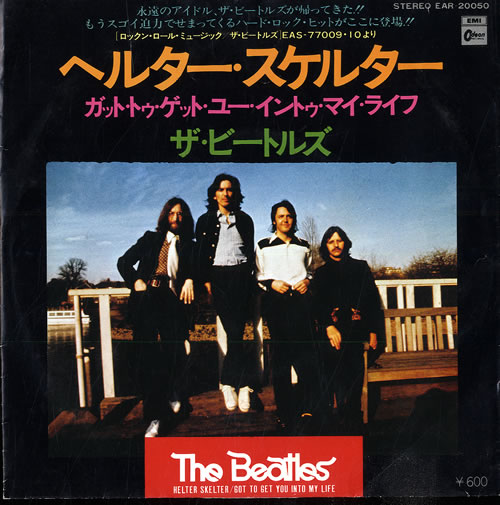 “I was in Scotland and I read in Melody Maker that Pete Townshend had said: ‘We’ve just made the raunchiest, loudest, most ridiculous rock ‘n’ roll record you’ve ever heard.’ I never actually found out what track it was that The Who had made, but that got me going,  just hearing him talk about it. So I said to the guys, ‘I think we should do a song like that,  something really wild.’ And I wrote Helter Skelter.

You can hear the voices cracking, and we played it so long and so often that by the end of it you can hear Ringo saying,’I’ve got blisters on my fingers’. We just tried to get it louder: ‘Can’t we make the drums sound louder?’ That was really all I wanted to do – to make a very loud, raunchy rock ‘n’ roll record with The Beatles. And I think it’s a pretty good one.”
– Paul McCartney (Anthology)

“Umm, that came about just ’cause I’d read a review of a record which said, ‘and this group really got us wild, there’s echo on everything, they’re screaming their heads off.’ And I just remember thinking, ‘Oh, it’d be great to do one. Pity they’ve done it. Must be great — really screaming record.’ And then I heard their record and it was quite straight, and it was very sort of sophisticated. It wasn’t rough and screaming and tape echo at all. So I thought, ‘Oh well, we’ll do one like that, then.’ And I had this song called “Helter Skelter,” which is just a ridiculous song. So we did it like that, ‘cuz I like noise.”
– Paul McCartney (Radio Luxembourg)

“Helter Skelter” is written by Paul McCartney, and recorded by the Beatles on their eponymous LP The Beatles, better known as The White Album. A product of McCartney’s deliberate effort to create a sound as loud and dirty as possible, the song has been noted for both its “proto-metal roar” and “unique textures” and is considered by music historians as a key influence in the early development of heavy metal.

The first version was a 27 minute jam that was never released. During the July 18, 1968 sessions, The Beatles recordedthe long version, which was much slower and less intense than the album version. Another recording from the same day was edited down to 4:37 for The Beatles Anthology, Volume III.

“…the first time the Beatles recorded the song at Abbey Road, they got so caught up in its heavy, screeching fury that they jammed on for more than ten minutes on one version, over twelve minutes on a second, and an epic, yet still tightly played, twenty-seven minutes on a third. On September 9, the night they taped the version of ‘Helter Skelter’ heard on the record, they held the length down to four and a half minutes but went just as wild, both on tape and off. Ringo’s impassioned scream, ‘I’ve got blisters on my fingers,’ was caught on tape, but had the Beatles also been filming a video that night, it would have shown George setting fire to an ashtray and running around the studio, wearing it on his head like a crown of fire.”
-Mark Hertsgaard (A Day In The Life: The Music and Artistry of the Beatles)

Mark Lewisohn on the 27 minute Helter Skelter:
“I made it clear to George Martin when we doing Anthology 3, that the fans are desperate to hear this and I urged him to listen to it, because I don’t think initially he was going to do so. He listened it, and he said ‘well, why is this important?’. I said forget the quality of the sound, or forget the fact that it’s not quite in tune or whatever, what a producer would normally be looking for, just respect the fact please that it is hailed as the most important outtake of them all, and the fans will go crazy if you don’t include this on the Anthology. So he took all that on board, which George always does, and he’s very good at that sort of thing, he listens. But, the next time I went in there, they said ‘here it is’ and it was like 5 minutes, and they’d trimmed it right down. And in fact they didn’t use the 27 minute one, there was another one as well that was 12 minutes, which they used, and they’d trimmed it down to 5 minutes. They said ‘this is all people will stand, they won’t stand the whole thing’. And I said ‘well, I think a lot of them will actually…’ “

The quintessential Sixties four-piece, their natural inclinations were for balance, form, and attention to detail, and in straining to transcend these obsolete values in HELTER SKELTER they comically overreached themselves, reproducing the requisite bulldozer design but on a Dinky Toy scale. Provoked by hearing that The Who had gone all out on their latest track to achieve the most overwhelming racket imaginable…. McCartney came up with this clumsy attempt to outdo them. .. Few have seen fit to describe this track as anything other than a literally drunken mess.
~Ian MacDonald (Revolution in the Head: The Beatles’ Records and the Sixties

That’s Paul completely. All that [Charles] Manson stuff was built ’round George’s song about pigs and this one… Paul’s song about an English fairground. It has nothing to do with anything and, least of all, to do with me.
~John Lennon, 1980

Do you, don’t you want me to love you
I’m coming down fast but I’m miles above you
Tell me tell me tell me come on tell me the answer
Well you may be a lover but you ain’t no dancer

Will you, won’t you want me to make you
I’m coming down fast but don’t let me break you
Tell me tell me tell me the answer
You may be a lover but you ain’t no dancer

Look out, cos here she comes

Well do you, don’t you want me to make you
I’m coming down fast but don’t let me break you
Tell me tell me tell me the answer
You may be a lover but you ain’t no dancer

(My head is spinning, ooh…

I got blisters on my fingers!)