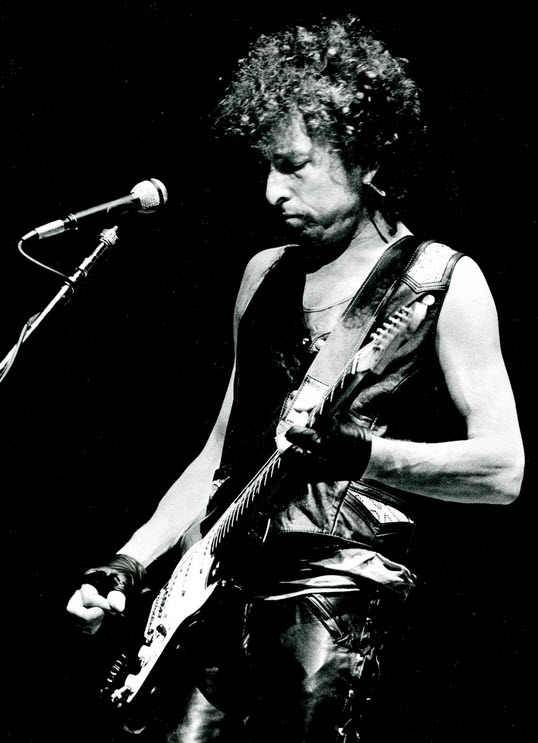 ..to draw a crowd with my guitar, that’s about the most heroic thing that I can do. To play a song to calm the king, well everybody don’t get to do that. There’s only certain things a King wants to hear. And then if he don’t like it, he might send you to the gallows. Sometimes you feel like a club fighter who gets off the bus in the middle of nowhere, no cheers, no admiration, punches his way through ten rounds or whatever, always making someone else look good, vomits up the pain in the backroom, picks up his check and gets back on the bus heading out for another nowhere. Sometimes like a troubadour out of the dark ages, singing for your supper and rambling the land or singing to the girl in the window, you know, the one with the long flowing hair
~Bob Dylan – August-September 1985, Cameron Crowe Interview (for Biograph)

I really don’t have any place to put my feet up…. well, we want to play ‘cause we want to play… Why tour? It’s just that you get accustomed to it over the years. The people themselves will tell you when to stop touring.
~Bob Dylan to Kathryn Baker – Aug 1988

It’s not stand-up comedy or a stage play. Also, it breaks my concentration to have to think of things to say or to respond to the crowd. The songs themselves do the talking. My songs do, anyway.
~Bob Dylan to Edna Gundersen – Sept 1989

Here are 8 videos you absolutely need to see. They are chosen for their historical significance and/or blistering performances.

The video also includes Like A Rolling Stone, Till I Get It Right (Red Lane/Larry Henley), Maggie’s Farm, Girl From The North Country, Ballad Of A Thin Man, Shot Of Love, The Times They Are A-Changin’, Let’s Begin (Jim Webb), Lenny Bruce, Slow Train, Mr. Tambourine Man, Solid Rock, Just Like A Woman, Watered-Down Love & Heart Of Mine

They ask me how I feel
And if my love is real
And how I know I’ll make it through
And they, they look at me and frown
They’d like to drive me from this town
They don’t want me around
’Cause I believe in you

Finally there is “Blowin’ In The Wind,” again broadcasted on Spanish TV and one of the most exciting performances of Dylan ever filmed.
~Clinton Heylin (A Life In Stolen Moments)

Soon [all the] nights they will be ended,
Soon, all true love will be so splen-did.
I’ve found the happiness I’ve waited for.
The only girl that I was waiting for.

7. Tomorrow Is A Long Time

8. The Ballad of Frankie Lee and Judas Priest