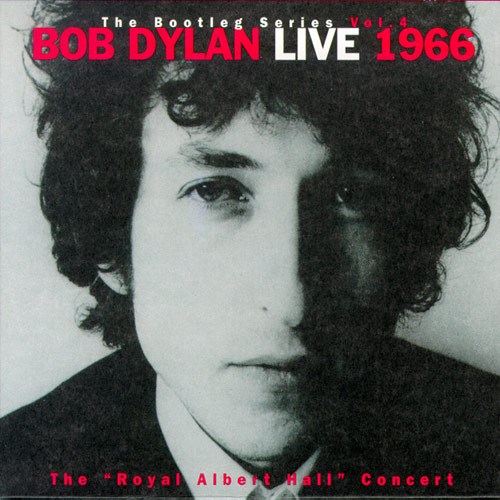 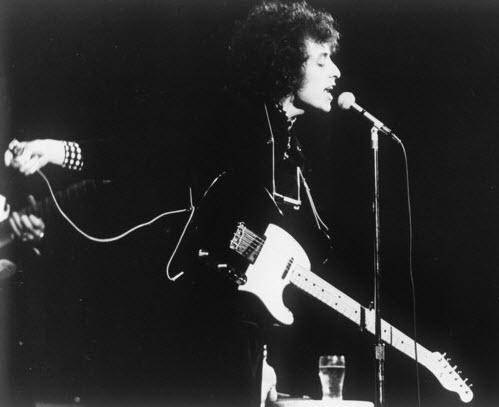 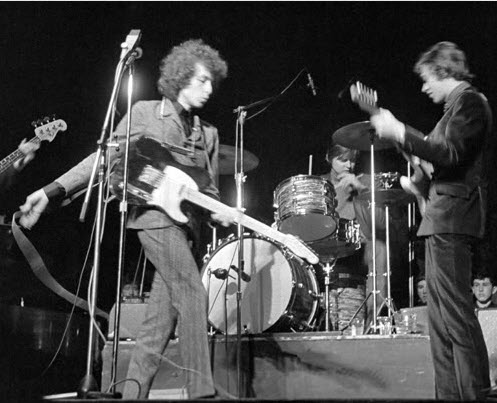 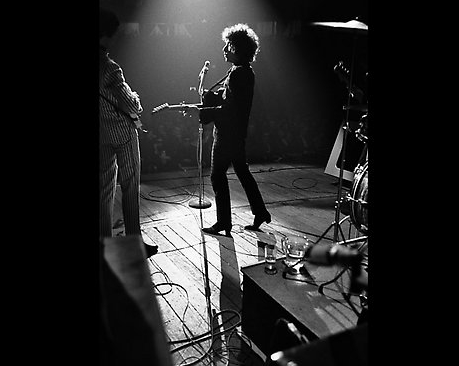 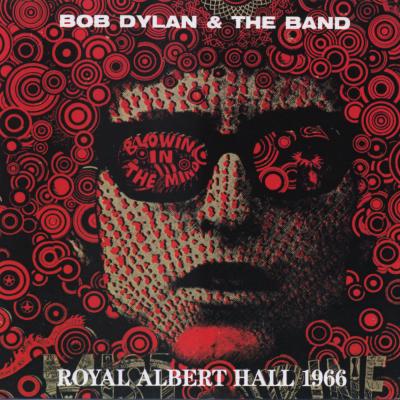 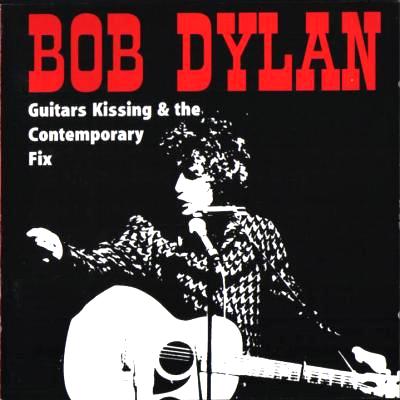 Tell Me Momma opens the electric part of the concert.. (Track 1 – CD2)

This is raw, it’s down and dirty rock’n’roll. Hell, it’s punk rock, man’
~Jon Spencer of the Blues Explosion

The two loudest things I’ve ever heard are a freight train going by, and Bob Dylan and the Band
~Marlon Brando

I felt like I was being forced back into my seat… like being in a jet when it takes off.
~C. P. Lee

The electric part of this concert first surfaced in late 1970 or early 1971 on bootleg LPs with various titles. On June 3, 1971, critic Dave Marsh reviewed one bootleg in Creem magazine, writing

“It is the most supremely elegant piece of rock ‘n’ roll music I’ve ever heard…The extreme subtlety of the music is so closely interwoven with its majesty that they appear as one and the same.” 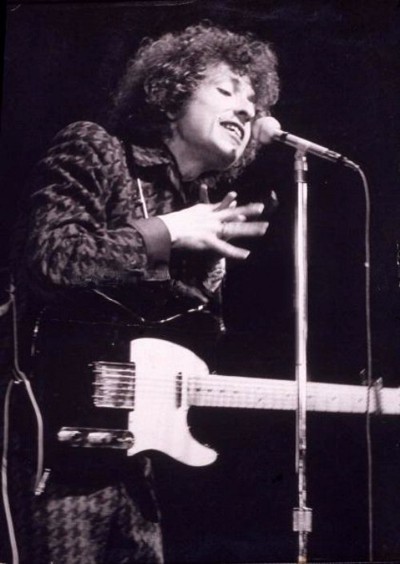 The same month, critic Jon Landau reviewed another edition of the concert:

Needless to say, the album is both musically great and an amazing path back into the temperament of the sixties. Listening to it, it isn’t hard to remember Dylan on stage of the Donnelly Memorial Theatre in Boston or at Forest Hills in New York standing toe to toe, eyeball to eyeball with Robbie Robertson between every verse of practically every song, while the guitarist played his fills. Nor is it hard to remember that long, lean, frail look that sometimes made you wonder what gave him the strength to stand up there in the first place, as he remembered the unbelievably complex lyrics to his unbelievably long songs, without ever faltering…It isn’t hard for me to remember the booing, the names, the insults he endured just to be standing there with an electric band…

The early bootleg LPs attributed the recording to one of Dylan’s tour-closing concerts at London’s Royal Albert Hall that was also recorded, as was a show in Liverpool (May 14), supervised by Dylan producer Bob Johnston. However, Dylan’s now-legendary confrontation with a heckler calling out “Judas” from the audience, clearly heard on the recording, was well documented as having occurred at Manchester’s Free Trade Hall on May 17, 1966. After “Judas!”, there is clapping, followed by more heckles. One of those shouts, barely audible on the record, is a man shouting, “I’m never listening to you again, ever!” Dylan then says “I don’t believe you”, then after a long pause, “You’re a liar.” Dylan turned towards the band can be heard telling them to “play it fucking loud” as they begin “Like a Rolling Stone.” At the end, the audience erupts into applause and Dylan says, “Thank you.” 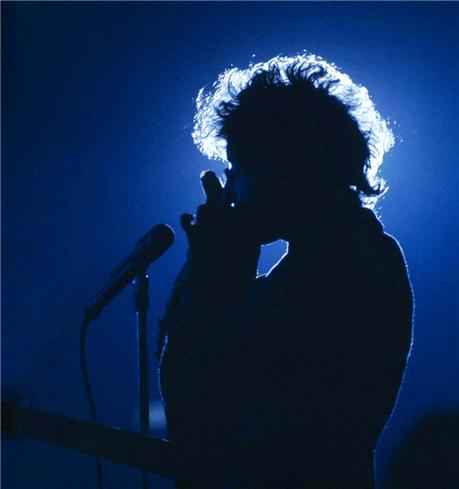 After years of conflicting reports and speculation among Dylan discographers, the Manchester source was verified after the preliminary mix of a proposed Columbia edition was bootlegged in 1995 as Guitars Kissing & The Contemporary Fix. Dylan rejected that edition; three years later, he authorized a markedly different version for his second “Bootleg Series” release. One song recorded at Dylan’s real Royal Albert Hall concert had been previously released: his May 26, 1966 performance of “Visions of Johanna” on the Box set Biograph. Excerpts from other 1966 UK performances are included in Martin Scorsese‘s 2005 television documentary No Direction Home. Film footage of the “Judas” incident was discovered and used at the end of the documentary.

Here it is… one of the of the most famous moments in rock history:

When Live 1966: The “Royal Albert Hall” Concert finally was released in 1998, it was a commercial and critical success, reaching #19 in the U.K. The inside leaflet reveals useful information about the conditions of how the concert was recorded and transferred to disc and it confirms that the version of “It’s All Over Now, Baby Blue“, previously released on the Box set Biograph, duly comes from this concert. 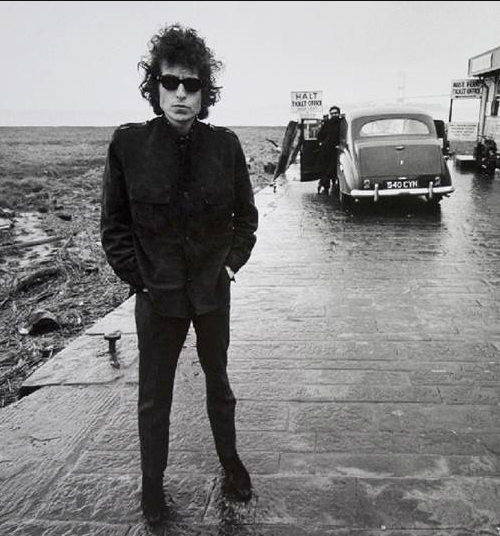 All songs written by Bob Dylan, except where noted 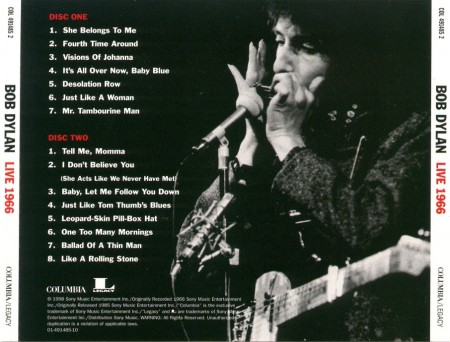 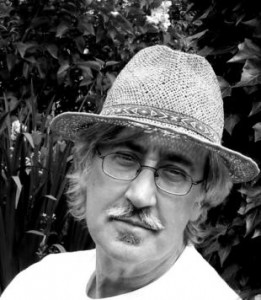 The most enthralling, truthful, priceless concert performance ever issued by a great artist.
Three decades afterwards, and in heart-stopping quality, came the complete concert from 1966 at last. Long thought to have been from the Royal Albert Hall, London (the early, incomplete bootlegs had claimed this), the concert was actually from the Manchester Free Trade Hall: the time-stopping  astonishing, riveting, synapse-crinkling acoustic solo half and, performed with THE HAWKS, the transcendent  revolutionary electric second half. Bob Dylan at the absolute lapidary peak of inspiration, just turned 25 years old and utterly dismissive of the received wisdom of showbiz. This concert also embraces that telling moment when someone in the audience shouts ‘Judas!’.

The 2-CD set is extremely well packaged, with a generous supply of vivid, telling photographs and an exceptionally fine, thoughtful essay, informed by the writer’s personal knowledge, by Dylan’s old Minnesota friend and fellow musician TONY GLOVER, plus decent and straightforward information
about the available officially recorded tour tapes and how they had been reprocessed for the release of this concert, 32 years after it happened.

Clinton Heylin (Behind the Shades): 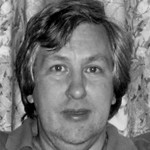 ..the Manchester show …features a considerably more controlled Dylan, even though it constitutes the most notorious battleground on the tour. The May 17 acoustic set may actually be the most unrepresentative solo set of the entire world tour. Gone are those gently gliding syllables, almost as if the previous night’s cocktail had left him little in reserve. The electric set, though, was particularly loud, and the reaction particularly explosive. 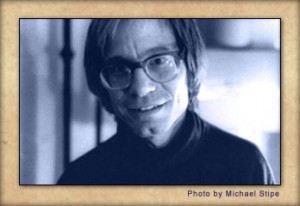 ..the Manchester electric set…. there’s so much here and it requires the creation of a new language to be able to talk about it and anyway you already know – “everything I’m saying, you can say it just as good” (Dylan sings this at Manchester with a weariness that has an extraordinary core of resilient strength,  surrounded by guitar notes and drum beats and organ riffs that are truly eloquent, full of very specific color and breathtaking beauty). The songs flow together into one song, moving from the explicit sexual (Tell Me Momma, I Don’t Believe You, Baby Let Me Follow You Down) to more complex, less identifiable, more emotional landscape (One Too Many Mornings, Ballad of A Thin Man, Like A Rolling Stone). The version of “Ballad Of A Thin Man” is arguably the most powerful I’ve ever heard. The band (that includes the vocalist) found the groove, I mean really found it, this performance is an ocean wide and a hundred light-years long (and ends right on schedule, the infinite in a nutshell).
And “Like A Rolling Stone,” impossibly, is the equal of the original recording, totally new and just as intense. 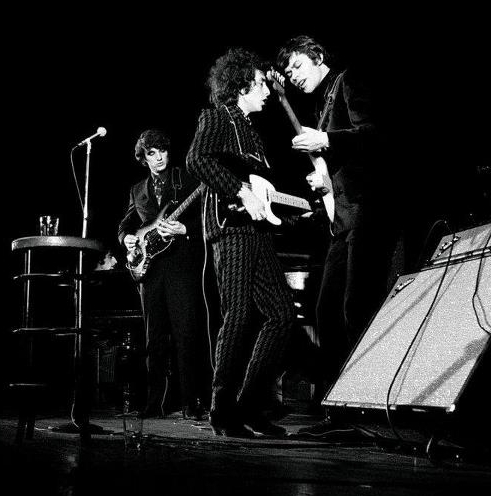 I can’t find “Ballad of a Thin Man” or “Like A  Rolling Stone” from this concert on youtube… (or soundcloud), but we need some videos from the 1966 tour (spotify is further down.. but not everybody has spotify).

Here is “Ballad of A Thin Man” from Copenhagen April 30:

..and from Royal Albert Hall in London on May 26: