I still say that some of the biggest criminals are those that turn their heads away when they see wrong and know it’s wrong. I’m only 21 years old and I know that there’s been too many wars… You people over 21 should know better. The first way to answer these questions in the song is by asking them. But lots of people have to first find the wind.
~Bob Dylan (The Freewheelin’ Bob Dylan Liner Notes – 1963)

The version of “Blowin’ in the Wind” that eventually appeared on The Freewheelin’ Bob Dylan was recorded at this July 9 session. Of all the available performances of this song from 1962 and 1963, this “official” recording is my favorite. It has a presence, a magic, as if Dylan took a deep breath and thought, “Okay, this one’s for posterity.” I don’t think Dylan ever put quite as much of himself into the song again. He didn’t have to. The song itself was in the wind at that point.
~Paul Williams (Bob Dylan: Performing Artist 1960-1973 The Early Years 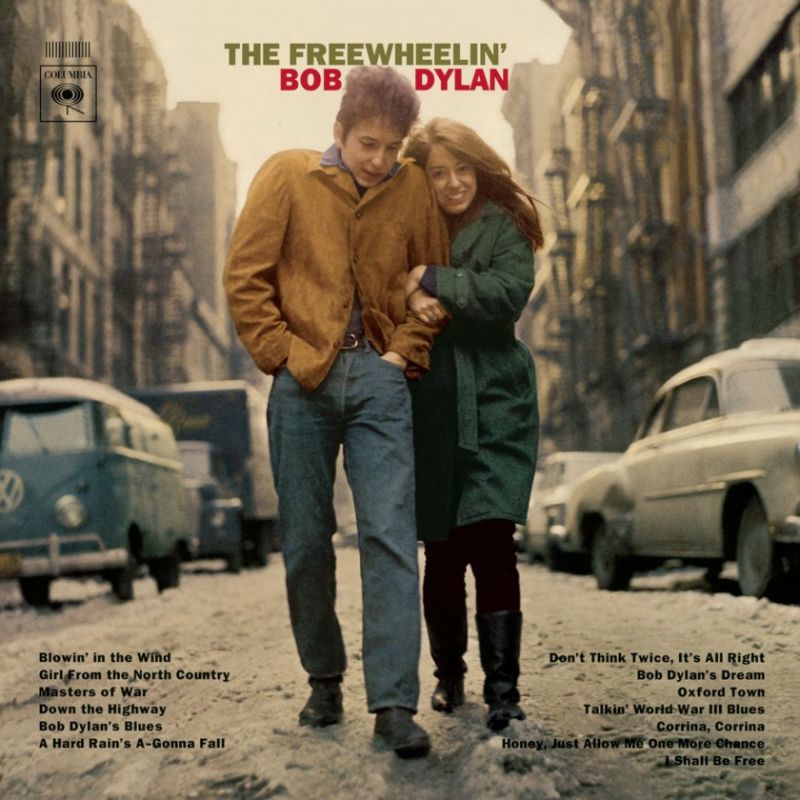 “Blowin’ in the Wind” is a song written by Bob Dylan in 1962 and released as a single and on his album The Freewheelin’ Bob Dylan in 1963. Although it has been described as a protest song, it poses a series of rhetorical questions about peace, war, and freedom. The refrain “The answer, my friend, is blowin’ in the wind” has been described as “impenetrably ambiguous: either the answer is so obvious it is right in your face, or the answer is as intangible as the wind”.

There ain’t too much I can say about this song except that the answer is blowing in the wind. It ain’t in no book or movie or T.V. show or discussion group. Man, it’s in the wind – and it’s blowing in the wind. Too many of these hip people are telling me where the answer is but, oh, I won’t believe that. I still say it’s in the wind and just like a restless piece of paper it’s got to come down some time… But the only trouble is that no one picks up the answer when it comes down so not too many people get to see and know it… and then it flies away again… I still say that some of the biggest criminals are those that turn their heads away when they see wrong and know it’s wrong. I’m only 21 years old and I know that there’s been too many wars… You people over 21, you’re older and smarter.
-Bob Dylan (Gil Turner Interview For Sing Out! – Oct/Nov 1962 issue)

The version of “Blowin’ in the Wind” that eventually appeared on The Freewheelin’ Bob Dylan was recorded at this July 9 session. Of all the available performances of this song from 1962 and 1963, this “official” recording is my favorite. It has a presence, a magic, as if Dylan took a deep breath and thought, “Okay, this one’s for posterity.” I don’t think Dylan ever put quite as much of himselfinto the song again. He didn’t have to. The song itself was in the wind at that point.
– Paul Williams (Bob Dylan Performing Artist I: The Early Years 1960-1973

“Blowin’ In The Wind was the first song I heard from Bobby. I fell in love with it because of the message. We could really relate to that, especially my father [Pops Staples]. Pops couldn’t understand how someone like Bobby could write such heavy songs as such a young man. He’d say Where did this little guy come from writing a message like that?’ But that song had an effect on a lot of people. When Sam Cooke heard Blowin’ In The Wind he said, ‘Now if a young white guy can write a song like that then I got to get my pen in hand.’ And that’s when he wrote A Change Is Gonna Come.
– Mavis Staples (MOJO Magazine – The 100 greatest Dylan songs)

If Bob had never written another song, this contribution would be enough for a lifetime. Its appeal is universal and eventually universal songs become so generic that we have to remember that their strength comes from their history, why they were written and who sang them.
– Joan Baez (Uncut Magazine – Bob Dylan’s 40 best songs)

As with most of his other classics, Dylan makes a complex song sound deceptively simple; in each of the three verses, he asks three rhetorical questions (i.e., “How many roads must a man walk down, before you call him a man?”), and answers each time with the chorus: “The answer, my friend, is blowin’ in the wind/The answer is blowin’ in the wind.” While the questions speak to the unending record of injustice in the long history of the world, the answers reflect the Taoist mantra that the solution is obvious to all who truly think about it, yet impossible to grasp with any type of standard (i.e., written or expressed) explanation. Though it’s masked in naturalistic thinking, “Blowin’ in the Wind” is an encapsulation of Eastern thinking within abstract songwriting that (surprisingly) made the charts and (not so surprisingly) became one of the most famous standards of the rock era.
– John Bush (allmusic.com)

On those few occasions when he has ignored his own dictum – and looked back – Dylan has made it clear that ‘Blowin’ in the Wind’ was one song that came very quickly. Conversing with Hilburn in 2004, he claimed he ‘wrote “Blowin’ in the Wind” in ten minutes, just put words to an old spiritual. . . . That’s the folk music tradition. You use what’s handed down.’ Forty years earlier, talking to Gargoyle, he was only marginally more modest, claiming he ‘wrote [it] in twenty minutes . . . in the Black Pussycat, down on MacDougal Street. I just wrote it just like that.’
– Heylin, Clinton – Revolution in the Air: The Songs of Bob Dylan 1957-1973 (Songs of Bob Dylan Vol 1)

In April 1962, at Gerde’s Folk City in New York’s Greenwich Village, 20-year-old Bob Dylan gave a quick speech before playing one of his new songs: “This here ain’t no protest song or anything like that, ’cause I don’t write no protest songs,” he said. Then he sang the first and third verses of the still-unfinished “Blowin’ in the Wind.” Published in full a month later in the folk journal Broadside and recorded on July 9th, 1962, for his second album, The Freewheelin’ Bob Dylan, “Blowin’ in the Wind” was Dylan’s first important composition. It is also the most famous protest song ever written.
– rollingstone.com (500 Greatest Songs of All Time)

David Blue, a musician who also spent some time in Greenwich Village, gives his version of that day, April 16, 1962: “Dylan and I had been killing the latter part of a Monday afternoon drinking coffee… About five o’clock, Bob pulled out his guitar and a paper and pencil. He began to strum some chords and fool with some lines he had written for a new song. Time passed and he asked me to play the guitar for him so he could figure out the rhymes with greater ease. We did this for an hour or so until he was satisfied. The song was “Blowin’ in the Wind.” They immediately decided to perform the new song for Gil Turner who was at Gerde’s Folk City. Turner was one of the MCs for folk evenings in Greenwich Village clubs— what were then called “hootenannies.” During the intermission, Turner met Dylan in the basement to hear Dylan’s new song. “Bob sang it out with great passion,” said David Blue. “When he finished there was silence all around. Gil Turner was stunned.”
– Margotin, Philippe; Guesdon, Jean-Michel – Bob Dylan All the Songs: The Story Behind Every Track

The song that first branded Dylan a prophet asks nine questions and answers none. Dylan claimed it took only 10 minutes to knock out this meditation on humanity’s inhumanity, a rewrite of the anti-slavery spiritual “No More Auction Block.” The version most people heard in 1963 wasn’t Dylan’s – it was Peter, Paul and Mary’s cover, which hit Number Two on the pop chart. But in any version, the words are so simple, it sounds like they’re handed down from the sky on stone tablets. “It’s absolutely wonderful writing,” says Merle Haggard. “It was timely then and is still timely today.”
– rollingstone.com (100 Greatest Bob Dylan Songs)

It took until June 28, 1984, playing to many thousand rabid Spaniards at a show in Barcelona, for him to finally understand the universality of its appeal. As the Iberians began to sing along with him word for word, a galvanized Dylan rose to the occasion, delivering the remainder of the song with the passion of a complete unknown, introducing it to those twenty hardy souls at Gerde’s for the very first time.
-Heylin, Clinton. Revolution in the Air: The Songs of Bob Dylan 1957-1973 (Songs of Bob Dylan Vol 1)

The footage of the last encore, “Blowin’ In The Wind” is priceless. Dylan had been encouraging the fans to sing along on the choruses to this song for about two weeks, but on this evening the crowd – who had been wonderful all through the performance.. – caught Dylan by surprise. They started singing – loudly and in fine harmony – at the first chorus.. , and Dylan is visibly and audibly startled, and then deeply moved.
~Paul Williams (BD Performing Artist 1974-86)