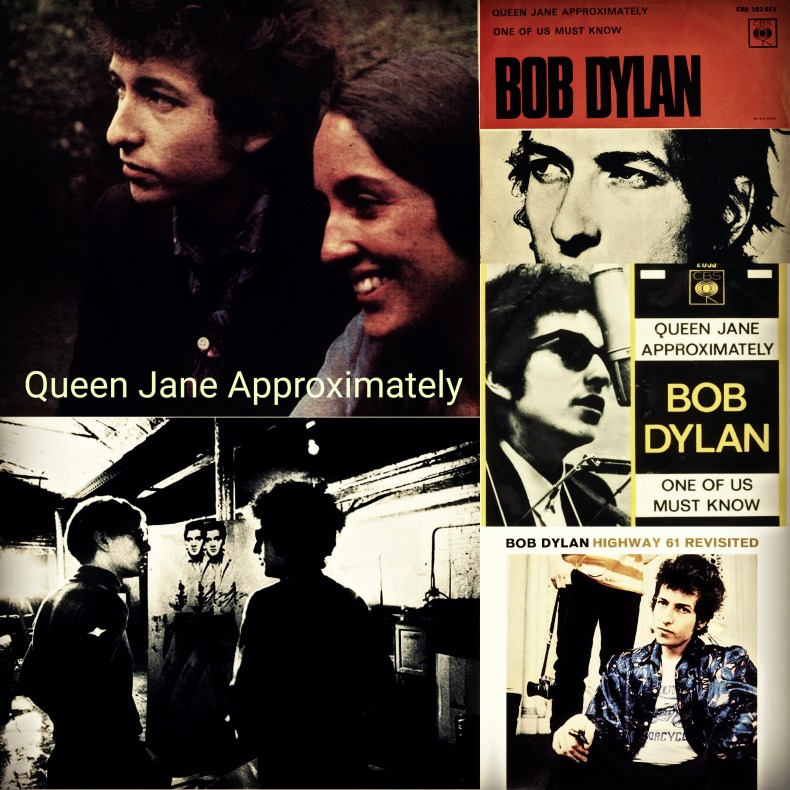 “Queen jane Approximately” is an underrated song, modest in what it tries to do lyrically and musically, brilliant in what it achieves. .. The musical achievement of “Queen Jane Approximately” is harder for me to point to – it has to do with the deceptive simplicity of its sound. The melody is sweet and appealing, with an insistent build-up and release of rhythmic tension underlying it that is striking, surprising, full of vengeance, violence, suppressed power.
– Paul Williams (Bob Dylan Performing Artist I: The Early Years 1960-1973)

The central gure in “Queen Jane” may even be the same queen bitch Bowie later portrayed in song. Andy Warhol was certainly some- one whose path crossed Dylan’s at this time. As the pop artist writes of the songwriter in Popism, “He was around 24 then and the kids were all just starting to talk & act & dress & swagger like he did. But not so many people except Dylan could ever pull o this anti-act. . . . He was already slightly ashy when I met him, de nitely not folky anymore. I mean, he was wearing satin polka-dot shirts.” By November 1965, after a year in which their supra-hip enclaves intersected at will, Dylan will- ingly sat for a silent lm portrait at Warhol’s Factory.
Nor is there a shortage of lines in “Queen Jane” that could be applied to our regal pop art exponent. May I o er up: “When . . . you’re tired of yourself and all of your creations,” “When all the clowns that you have commissioned,” “When all your advisers heave their plastic,” and so on. Written when all his songs were “city songs,” this could have been Dylan’s way of saying he was not impressed by the hangers-on Warhol seemed to like accumulating.
–Clinton Heylin (Revolution in the Air: The Songs of Bob Dylan, 1957-1973)

..For the listener, the song is a chance to catch one’s breath, a rest stop along the way, relatively lighthearted and lightweight. Even the music sounds friendlier, kicking off with a bouncy piano riff (all instruments starting together, for once) that wouldn’t be out of place in a hotel lobby or wedding reception. .. Musically, too, “Queen Jane Approximately” stays low-key, its most distinguishing characteristic being the Spanish-inflected bass figure and plain-Jane guitar strum at each turnaround. Though some have criticized Bloomfield for being out of tune (and his playing here does flirt dangerously with its own scale), that simple, rolling strum is the part that sticks in the mind after the song has gone its unassuming way.
–Mark Polizzotti – Bob Dylan’s Highway 61 Revisited (33 1/3)

Harvey Brooks, who plays the bass, explained the recording process: “When I recorded with Dylan on Highway 61 and New Morning there were the minimal amount of takes. His performance and the overall feel were the determining factors of the master take. Tuning or mistakes were not as important.” 53 A focus on general feeling was actually crucial to the final result, although there is a regrettable lack of accuracy in the guitar parts. Al Kooper delivers an excellent organ part, the bass and drums are in harmony, the piano leads the song from one end to the other, and Bob himself provides an excellent vocal and a harmonica part in C. The covers by the Grateful Dead and the Four Seasons demonstrate
–Margotin, Philippe; Guesdon, Jean-Michel (Bob Dylan All the Songs: The Story Behind Every Track )

Unlike some of Dylan’s more vicious odes to stuck- up princesses, Queen Jane Approximately shoots its poison arrows with grace and an insistently singable chorus. The out-of-tune guitar somehow lends a nice touch of garage rock rawness to an arrangement otherwise dominated by the piano-organ blend his records of the period did so much to innovate. Dylan never spelt out the identity of his target, typically claiming Jane was a man. But well-known pacifist Joan Baez certainly seems a likely candidate, given the similarity of her first name and the line about the bandits Queen Jane turns the other cheek to.
–Mojo Magazine (The 100 Greatest Dylan Songs)

Joan Baez once referred to Highway 61 Revisited as a “bunch of crap.” She may have been commenting on the raucous sound; she may also have been thinking of this song, a takedown of a woman cloistered by beauty and privilege. “Queen Jane” goes from caustic (“When all the clowns that you have commissioned have died in battle or in vain”) to tender (“Won’t you come see me, Queen Jane?”), and the music is some of the most elegant on Highway. Is the song about Baez? Maybe. When a journalist asked him about the queen’s identity, Dylan shot back, “Queen Jane is a man.”
–Rollingstone.com (100 Greatest Bob Dylan Songs)

.. Born again, the song has gone on from strength to strength. The ver- sion on the penultimate night of an October 1989 New York residency at the Beacon Theatre might even get my vote over its 1965 archetype. Though it takes time to build some momentum—and Dylan can only hold on for as long as he sticks to the song itself, and not some imagi- nary harmonica fugue he adds as a coda—those ve minutes transport his entire expressive range back in time. Its semi-acoustic incarnation at the November 1993 Supper Club shows almost rekindles the same emotional range. And these days the members of the band even usually play in the same key.
-Clinton Heylin (Revolution in the Air: The Songs of Bob Dylan, 1957-1973)

Bless Bob indeed, for going into the transcendent Queen Jane Approximately. His voice hit a high note in the song’s opening, surging over the band’s thrilling accompaniment, and then there was the totally wonderful Dylanesque-to-the-nth-degree vocalisation of the stretched-out line endings.
~Andrew Muir (One More Night)