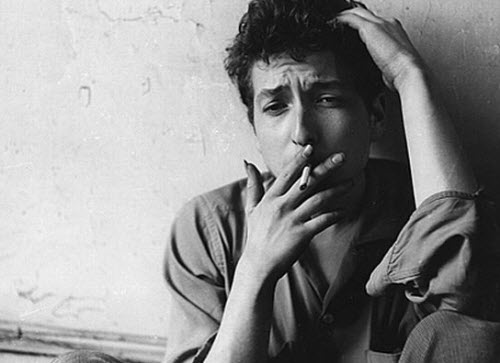 Bob Dylan was never at a loss for a putdown, and “It Ain’t Me Babe,” which appeared as the final track on his fourth album, Another Side of Bob Dylan, in August 1964, was one of his classic songs of criticism and rejection, in the tradition of “Don’t Think Twice, It’s All Right.” The difference between it and Dylan’s several earlier songs about romantic discord is that he gives no indication that he was ever interested in the person he is dismissing. .. some listeners have interpreted “It Ain’t Me Babe” as a message from the singer to his audience, telling them that he is no longer willing to be the political spokesman, “the voice of his generation” that he had been cast as in the past year.
~William Ruhlmann (allmusic.com)

Johnny Cash recorded the song with June Carter. The song was released on Cash’s 1965 album, Orange Blossom Special, and became a hit.

Go lightly from the ledge, babe
Go lightly on the ground
I’m not the one you want, babe
I will only let you down
You say you’re lookin’ for someone
Who will promise never to part
Someone to close his eyes for you
Someone to close his heart
Someone who will die for you an’ more
But it ain’t me, babe
No, no, no, it ain’t me, babe
It ain’t me you’re lookin’ for, babe

Go melt back into the night, babe
Everything inside is made of stone
There’s nothing in here moving
An’ anyway I’m not alone
You say you’re lookin’ for someone
Who’ll pick you up each time you fall
To gather flowers constantly
An’ to come each time you call
A lover for your life an’ nothing more
But it ain’t me, babe
No, no, no, it ain’t me, babe
It ain’t me you’re lookin’ for, babe