Jonathan Cott: Why have you been able to keep so in touch with your anger throughout the years, as
revealed in songs like Can You Please Crawl Out Your Window? and Positively 4th Street?
Bob Dylan: Will power. With strength of will you can do anything. With will power you can
determine your destiny.
(from the Jonathan Cott interview Dec 1977)

“Can You Please Crawl Out Your Window?” was a 1965 single by American rock artist Bob Dylan. It reached #58 on the US Billboard Hot 100 chart, and #17 on the UK chart in January 1966. Dylan is accompanied on the song by the musical group then known as The Hawks, who had backed the singer on his 1966 world tour and would subsequently go on to fame in their own right as The Band: Robbie Robertson (guitar), Rick Danko (bass), Richard Manuel (piano), Garth Hudson (organ), and Levon Helm (drums).

Numerous takes of the song were recorded on July 30, 1965 during the sessions for the album Highway 61 Revisited with a band including Mike Bloomfield, Al Kooper and Paul Griffin; one was mistakenly issued on a false pressing of the single Positively 4th Street that autumn.

The official single version, with the Hawks, is generally considered to have been recorded on November 30, 1965.

The entire July 1965 and October/November 1965 recording sessions were released on the 18-disc Collector’s Edition of The Bootleg Series Vol. 12: The Cutting Edge 1965–1966 in 2015, while highlights from the outtakes appeared on the 2-disc and 6-disc versions of that album. 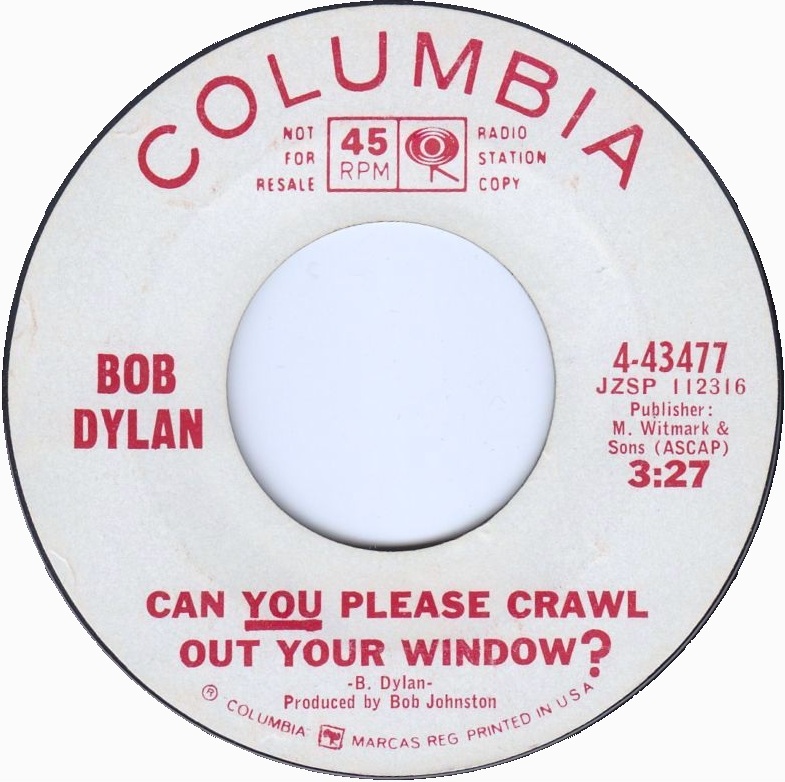 The 2nd Blonde On Blonde session, produced by Bob Johnston.

The Hawks give their all on this single version, the wordplay is quintessential midperiod Dylan, and his vocal is a delight, but the song showed no obvious advance on an album’s worth of dispositions reflecting that ‘sadistic put-down game’ his sustained amphetamine habit was merely exacerbating. It failed to replicate the success of the previous two Dylan 45s, both of which went Top Ten Stateside.
-Clinton Heylin (Revolution in the Air: The Songs of Bob Dylan 1957-1973 (Songs of Bob Dylan Vol 1))

He sits in your room, his tomb, with a fist full of tacks
Preoccupied with his vengeance
Cursing the dead that can’t answer him back
I’m sure that he has no intentions
Of looking your way, unless it’s to say
That he needs you to test his inventions

He looks so truthful, is this how he feels
Trying to peel the moon and expose it
With his businesslike anger and his bloodhounds that kneel
If he needs a third eye he just grows it
He just needs you to talk or to hand him his chalk
Or pick it up after he throws it

“Can You Please Crawl Out Your Window?” was the cause of the fight between Bob Dylan and folksinger Phil Ochs. One evening, the composer had David Blue and Phil Ochs listen to his song. The first one liked it: “A good rock song,” he said. Ochs risked making a comment. “It’s OK, but it will never be a hit.” Dylan went into a rage. “What do ya mean, it’s not going to be a hit? You’re crazy, man. It’s a great song.” 2 Anthony Scaduto told the tale of what followed. At this point, a limousine arrived to drive them to a downtown club. They climbed aboard, but at the time when the driver was about to turn a few blocks before (Sixth Avenue), Dylan yelled at the driver, “Stop!” The car stopped and Dylan turned to Ochs to tell him, “Ochs, get out!” Ochs was white as a sheet. He couldn’t tell if Dylan was serious or joking. “Get out, Ochs!” Dylan repeated. “You’re not a folksinger. You’re just a journalist.” 2 The two songwriters did not see each other for nine years (until a concert in support of Chile in 1974). “Can You Please Crawl Out Your Window?” was the first song that Bob Dylan recorded with the Hawks, the future Band.
-Margotin, Philippe; Guesdon, Jean-Michel. Bob Dylan All the Songs: The Story Behind Every Track