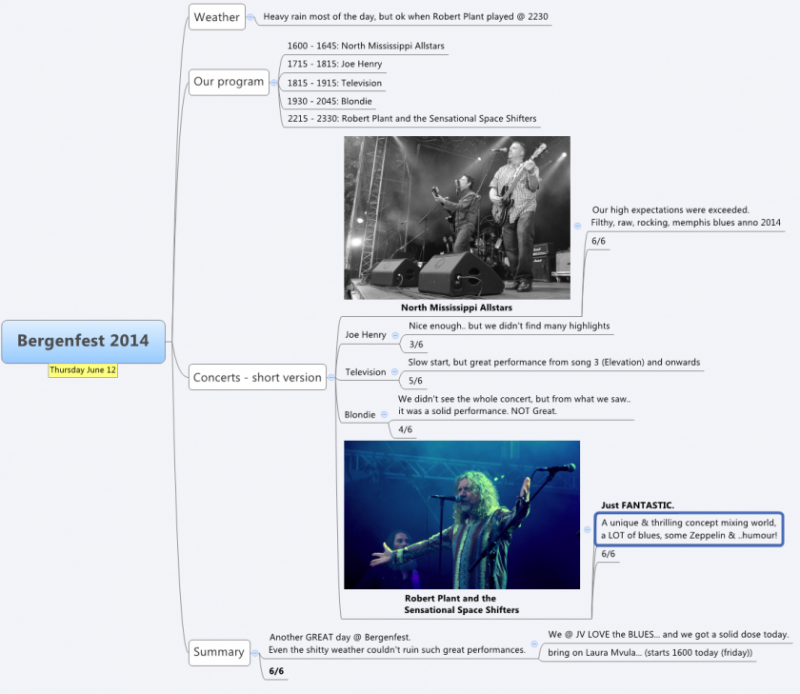 Mr. Plant was in a splendid mood, joking and clearly having fun. When he did Whole Lotta Love the audience went wild, he started it as a slow call and response blues before the band kicked in into a full-blown rock’n roll anthem. He then slowed it down again and had a middle act where he incorporated a “Who do you love” segment before finishing the song in Rock heaven. So fresh, but still so true to the original song!

This gentleman of Rock delivered way beyond our expectations, the concert was amazing!

We knew North Mississippi Allstars was a good band, but we had no idea! It was mindblowing! What a fantastic start to the second day at this years Bergenfest. They threw a party, a southern blues revival, they preach the gospel of blues, rock’n roll and soul. North Mississippi Allstars are great musicians, but what we’ll remember from this fantastic show is the joy and celebration of music. They marched off of the Bastionen stage, they stomped through an adoring and very happy  audience beating on drums in a magical, hypnotic display. The band made many new fans this day in Norway.

It was a thrill!

Luther and Cody Dickinson’s father was the Memphis musician and record producer, Jim Dickinson. He, besides releasing music in his own name, worked with Ry Cooder, Bob Dylan, the Rolling Stones, and Primal Scream. Jim Dickinson also set up the Zebra Ranch recording studio complex during the 1990s in Hernando, Mississippi. His boys have clearly drunk from a rich well of wisdom and musicianship.

“(Jim Dickinson is)…. that magical musical maestro from Memphis…. he was the kind of guy you could call to play piano, fix a tractor, or make red cole slaw from scratch.”
-Bob Dylan

One thought on “JV reporting from Bergenfest 2014: Day 2”