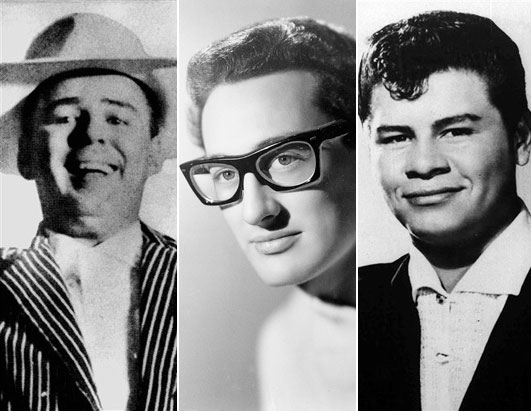 The tour began in Milwaukee, Wisconsin, on January 23, 1959. The amount of travel created a logistical problem with the tour. The distance between venues had not been considered when scheduling each performance. Adding to the disarray, the tour bus was not equipped for the weather. Its heating system broke shortly after the tour began, in Appleton, Wisconsin. While flu spread among the rest of the performers, Holly’s drummer, Carl Bunch, was hospitalized in Ironwood, Michigan, for severely frostbitten feet. The musicians replaced that bus with a school bus and kept traveling.  As Holly’s group had been the backing band for all of the acts, Holly, Valens, and Dion DiMucci took turns playing drums for each other at the Green Bay, Wisconsin, and Clear Lake, Iowa, performances.

On February 2, the tour arrived in Clear Lake, where they were to play at the Surf Ballroom. The venue had not been a scheduled stop, but the tour promoters, hoping to fill an open date, called Surf Ballroom manager Carroll Anderson and offered him the show. He accepted and they set the show for Monday, February 2. By the time Holly arrived at the venue that Monday evening, he was frustrated with the tour bus. Holly decided to charter a plane to take him to the next stop in Moorhead, Minnesota, to avoid traveling in the bus, and to have enough time to do laundry. 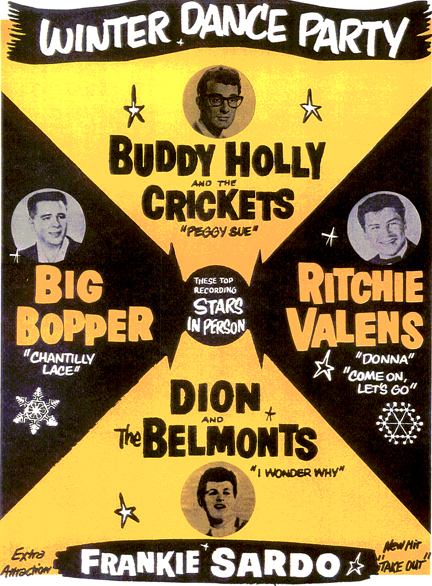 When the show ended, Carroll Anderson drove Holly, Valens, and Richardson to the airport.  The plane departed from the ramp and taxied to then-Runway 17 at around 12:55 a.m. Central Time on Tuesday, February 3. The weather report indicated light snow with a ceiling of 5,000 feet (1,500 m) and winds from 29 to 37 mph (47 to 60 km/h). Though there were indications of deteriorating weather along the route, the weather briefings Peterson received failed to relay the information.  The Civil Aeronautics Board (CAB)—an agency later replaced by the National Transportation Safety Board (NTSB)—investigated the crash.

The results of the CAB investigation suggest that, soon after takeoff, Peterson became disoriented due to the unfamiliar way the attitude indicator in the aircraft functioned, combined with an inability to find a point of visual reference on a starless night with no visible lights on the ground. He lost control of the plane when the tip of the right wing hit the ground. 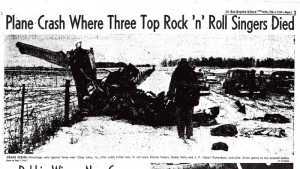 The aircraft tumbled across a bean field belonging to Albert Juhl. The Bonanza was at a slight downward angle and banked heavily to the right when it struck the ground at around 170 mph (270 km/h). The plane tumbled and skidded another 570 feet (170 m) across the frozen landscape before the crumpled wreckage came to rest against a wire fence at the edge of Juhl’s property.

Playlist with my favourites from the three artists: