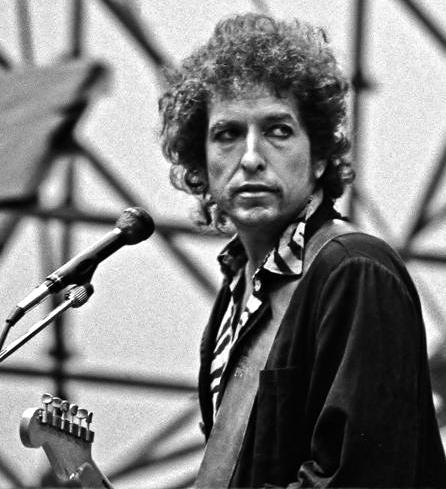 And yet to have been present at the best of the 1984 shows (Paris, Barcelona, Vienna, Offenbach), particularly if one was somewhere towards the front of the sea of humanity, able to see the man and hear him, must have been an unforgettable experience. Here is Dylan offering himself – through his singing; he does almost no talking between songs – openly and enthusiastically and warmly.
… Paris (July 1) is my favorite show of the tour (based on the tapes).
~Paul Williams (BD Performing artist 1974-86)

#3 – All Along The Watchtower

She was married when they first met,
to a man four times her age.
He left her penniless, in the state of regret,
it was time to bust out of the cage.
They drove that car as far as they could,
abandoned it out west.
splitting up on a dark, sad night,
both agreeing that it was best.
And she turned around to look at him
as he was walking away.
She said I wish I could tell you all the things
that I never learned how to say.
He said thats alright babe I love you too,
but we were tangled up in blue.

..the single best live version of “It’s Alright, Ma” that I’ve ever heard… Nothing is thrown away, no part of the song is sung on automatic pilot. The performer is awake. The result is frightening, and beautiful.
~Paul Williams (BD Performing Artist 1974-86)

You must leave now, take what you need, you think will last
But whatever you wish to keep, you better grab it fast
Yonder stands your orphan with his gun
Crying like a fire in the sun
Look out the saints are comin’ through
And it’s all over now, Baby Blue