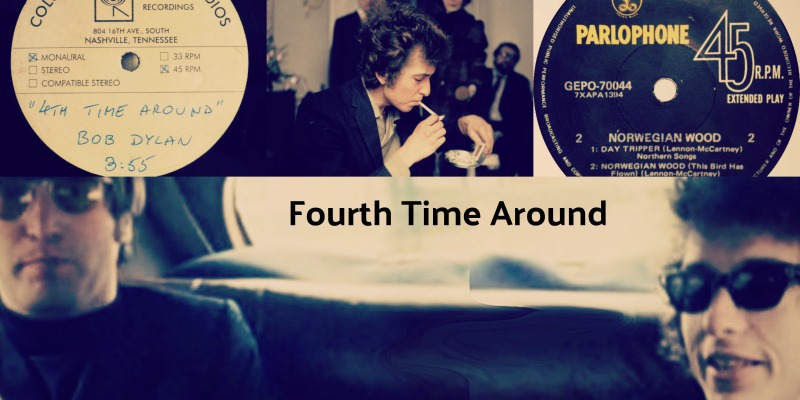 When she said
“Don’t waste your words, they’re just lies”
I cried she was deaf
And she worked on my face until breaking my eyes
Then said, “What else you got left?”
It was then that I got up to leave
But she said, “Don’t forget
Everybody must give something back
For something they get”
–

What exactly inspired “4th Time Around” is one of the great Dylan mysteries. The melody and story line are a direct takeoff of the 1965 Beatles song “Norwegian Wood” – among the band’s first songs with a clear Dylan influence. Was the line “I never asked for your crutch, now don’t ask for mine” a warning to stop ripping him off? Dylan’s never said, but three months after he recorded it, he went on a famously stoned limo ride with John Lennon around London and didn’t seem to be harboring any malice. The next year he released John Wesley Harding, which has what appears to be an upside-down image of the Beatles hidden in a tree on the cover – but that’s another mystery.
–Rollingstone.com 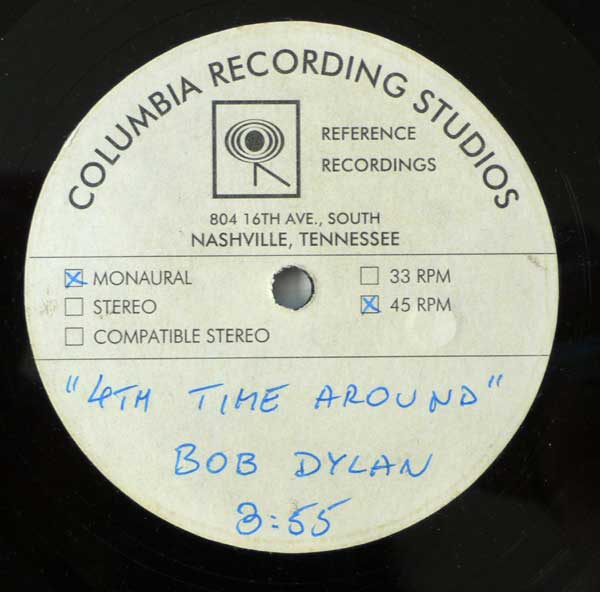 “4th Time Around” was commonly speculated to be a response to The Beatles’ song “Norwegian Wood” – written by John Lennon and Paul McCartney for the 1965 album Rubber Soul – as the two tracks share a reasonably similar melody, lyrical premise, and 3/4 time signature. “4th Time Around” has been seen as either a playful homage, or a satirical warning to Lennon about co-opting Dylan’s well-known songwriting devices. Lennon expressed a range of opinions on this topic in interviews between 1970 and 1980. He initially felt it to be a somewhat pointed parody of “Norwegian Wood”, but later he considered Dylan’s effort to be more a playful homage. Still, the last line of “4th Time Around” (“I never asked for your crutch / Now don’t ask for mine.”) played into Lennon’s apparent paranoia about Dylan in 1966–67, when he interpreted this line as a warning not to use Dylan’s songs as a “crutch” for Lennon’s songwriting. 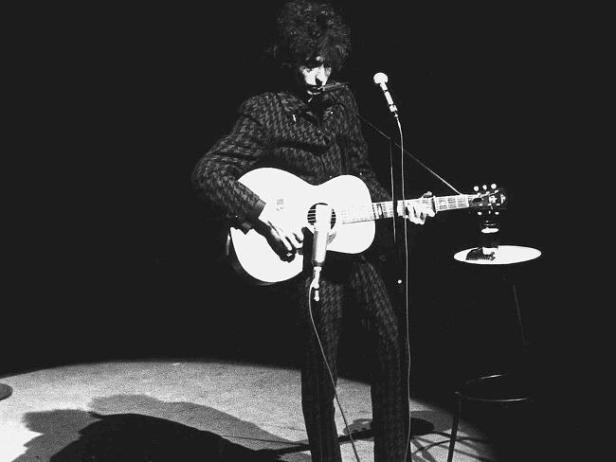 “4th Time Around” was the first song recorded in Nashville. It seems to have been difficult to cut, since it required no less than twenty takes. Al Kooper remembers saying after listening to the cut: “I thought it was very ballsy of Dylan to do ‘4th Time Around.’ I asked him about it— I said, it sounds so much like ‘Norwegian Wood,’ and he said, ‘Well, actually, “Norwegian Wood” sounds a lot like this!’” 24 In 2012 at a conference at Belmont University in Nashville, Kooper explained that when he expressed concern about a possible lawsuit by the Beatles, Dylan told him that the Fab Four’s “Norwegian Wood” was inspired by his song, which he had played for them in private and that, therefore, they would not sue him.
– Margotin, Philippe; Guesdon, Jean-Michel. Bob Dylan All the Songs: The Story Behind Every Track

..a minor song on Blonde on Blonde, is more than just a parody of THE BEATLES’ song from a few months earlier, ‘Norwegian Wood’, though there is certainly a strong parallel between that song’s distinctive melody, sung by JOHN LENNON, and the melody Dylan uses. It says something about how these two were perceived that Dylan was suspected (not least by Lennon) of parodying, rather than copying, the Beatles. Years later, when GEORGE HARRISON was asked in an interview about the way that the Beatles and Dylan had influenced each other, he seemed to suggest that ‘4th Time Around’ wasabout ‘Norwegian Wood’, and about how that song had been inspired by Dylan in the first place..
-Michael Gray

Dylan’s song “Fourth Time Around” (from Blonde on Blonde, February 1966) and its relationship to the Beatles’ “Norwegian Wood” (from Rubber Soul, December 1965) are fairly well known but worth mentioning in the larger context of Dylan’s thefts and intertexts. The song has been described as “Bob Dylan impersonating John Lennon impersonating Bob Dylan,” but it is also a song in which Dylan triumphs in the battle that he wages with Lennon. When you listen to “Fourth Time Around” and then go back to “Norwegian Wood,” the Beatles song sounds coy, almost innocent in comparison to the sophistication of Dylan’s voice and lyrics on the classic 1966 album. It is hard to imagine Dylan actually singing this to Lennon, which he apparently did, and it is very easy to believe reports of Lennon being unhappy at what must have seemed like mockery and parody. Dylan outdoes, accentuates, overloads the rhymes, and on one level does parody the simple rhyme of the Beatles song.
-Thomas, Richard F.. Why Bob Dylan Matters

I’ve probably listened to it 50, 60 times trying to figure out exactly what’s going on. The melody is really similar to Norwegian Wood and I love the repetitive classical guitar lick, the machine-gun drumbeat, and the bass line that just keeps driving and driving. Dylan can talk about real emotions and then go way off and say something completely aesthetic. The end result is this really rich, interesting piece that you can dig into forever. This one’s kind of a warning. The new girlfriend is being told how it ended with the last one, and if you’re not careful. .. That line is really hard: ‘I never asked for your crutch/ Now don’t ask for mine.’ Or maybe it really is about The Beatles after all!
-Win Butler (The Arcade Fire)

When she said
“Don’t waste your words, they’re just lies”
I cried she was deaf
And she worked on my face until breaking my eyes
Then said, “What else you got left?”
It was then that I got up to leave
But she said, “Don’t forget
Everybody must give something back
For something they get”

I stood there and hummed
I tapped on her drum and asked her how come
And she buttoned her boot
And straightened her suit
Then she said, “Don’t get cute”
So I forced my hands in my pockets
And felt with my thumbs
And gallantly handed her
My very last piece of gum

She threw me outside
I stood in the dirt where ev’ryone walked
And after finding I’d
Forgotten my shirt
I went back and knocked
I waited in the hallway, she went to get it
And I tried to make sense
Out of that picture of you in your wheelchair
That leaned up against . . .

Her Jamaican rum
And when she did come, I asked her for some
She said, “No, dear”
I said, “Your words aren’t clear
You’d better spit out your gum”
She screamed till her face got so red
Then she fell on the floor
And I covered her up and then
Thought I’d go look through her drawer

And when I was through
I filled up my shoe
And brought it to you
And you, you took me in
You loved me then
You didn’t waste time
And I, I never took much
I never asked for your crutch
Now don’t ask for mine

Requiring the band to follow the words more than the melody made it a tough song to do electric, which presumably explains why it took until April 1999 for Dylan to attempt a band arrangement live. When he did, though, on April 18 in Granada*, he delivered one of the great triumphs of the Never Ending Tour, caressing every line like he was back at the Royal Albert Hall playing to the gallery. He may even have improved the song by inverting the lines ‘You, you took me in’ and ‘You loved me then.’
– Heylin, Clinton. Revolution in the Air: The Songs of Bob Dylan 1957-1973 (Songs of Bob Dylan Vol 1)

When he revisited the song in concert in the 1990s the melody line he chose showed just how close to ‘Norwegian Wood’ the song really was. He gave an especially fine performance at the first of his two concerts in Portsmouth, England, on Sep- tember 24, 2000.
-Michael Gray

One thought on “Bob Dylan’s Best Songs: Fourth Time Around”