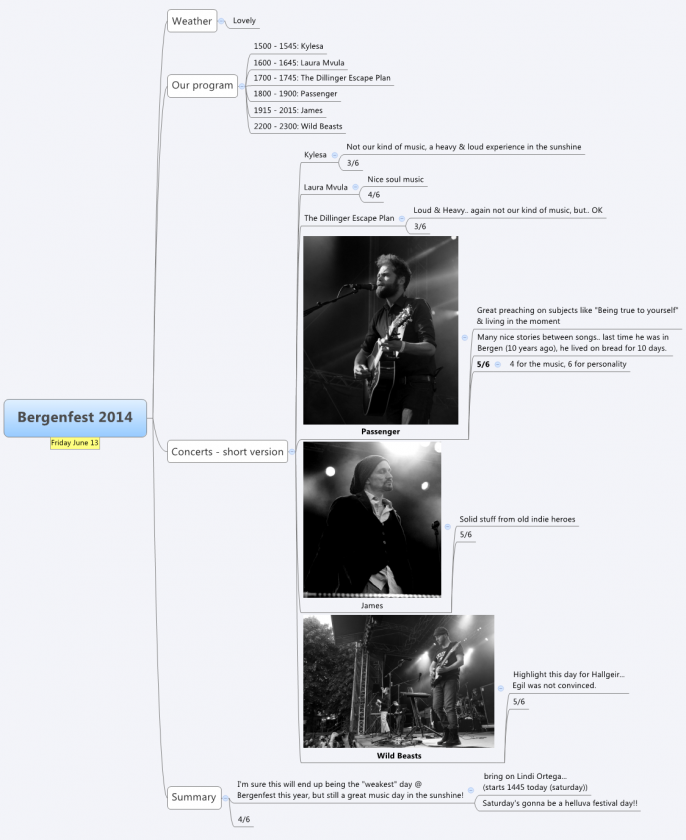 Wild Beasts hit Bergenfest last night, they turned out to be a good festival booking.

I find that a lot of times that electronica infused indie rock often lets us down in concert. This was absolutely not the case with Wild Beasts.They really rocked the Bastionen stage this sunny evening in support of their new album Present Tense (great album, we (Hallgeir) play it a lot!)

Wild Beasts are an indie rock band from Kendal, England. They released their first single, “Brave Bulging Buoyant Clairvoyants”, on Bad Sneakers Records in November 2006, and subsequently signed to Domino Records. They have released four acclaimed albums, Limbo, Panto in 2008, Two Dancers in 2009, Smother in 2011, and Present Tense in 2014.

We were impressed with the perfect voices and the immaculate pacing, this is a band that know their stuff. Good live act.

Cheers and thanks to Wild Beasts!

We went to this concert with few expectations. We had, of course, heard his monster-hit, Let her go, but that was about it. We sat down in front of the big Plenen stage, and Michael David Rosenberg gave us a very pleasent show. He had lots more good songs and he infused his concert with funny and sad stories and real audience interaction. The concert made perfect sense in the sun this Friday at Bergenfest. He is not at all the teen-idol I thought he was, he is a singer-/songwriter in the truest meaning of the word.

—
Rosenberg on being true to yourself:
… all these people around you telling you “get a real job”.. whatever the fuck that means ?
—

Michael David Rosenberg (born 17 May 1984), better known by his stage name Passenger, is an English folk-rock singer-songwriter. Previously the main vocalist and songwriter of Passenger, Rosenberg opted to keep the band’s name for his solo work after the band dissolved in 2009. His most successful single, “Let Her Go”, has topped the charts in many countries.

—
From the real funny song “I Hate”:
–
..I hate racist blokes, telling tasteless jokes
And explaining where people belong
I hate ignorant folks, who pay money to see gigs
And talk through every fucking song

… Well I hate them fussy eaters, you cook them fajitas
They only eat pizza and chips
I hate stepping outside, for a smoke and some guy
Coughs, like your lungs are his
And I hate queuing up, for festival toilets
Especially when you need to shit
And I hate the X-Factor, for murdering music
You bunch of money grubbing pricks

We drank beer, smiled, a bit tipsy in the warmth of the music and the sun.