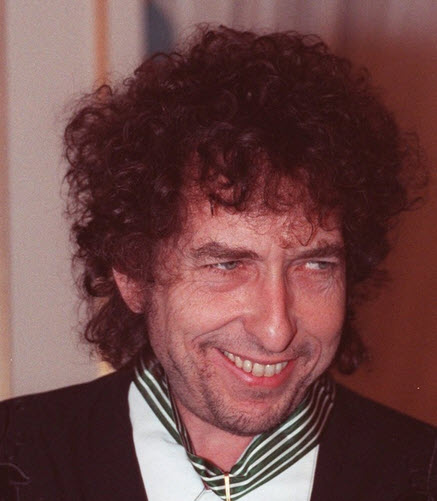 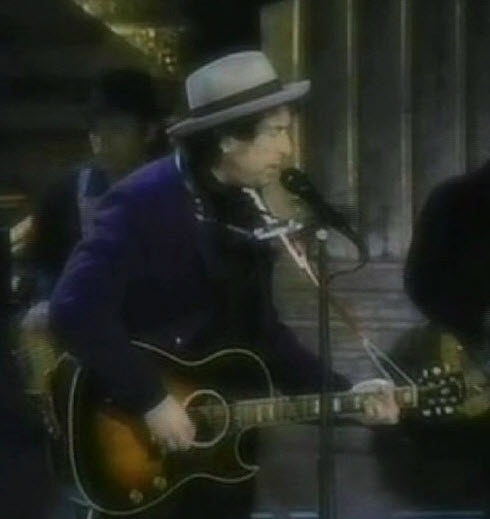 under the red sky seems to oppress an awful lot of Dylan fans. Some particularly infantile criticism has been directed at its self conscious use of nursery rhyme-like constructions, largely from people entirely ignorant of nursery rhymes’ centuries-old role in the folk tradition. Dylan certainly received little credit for daring to make a gut-bustin’ R&B record less than a year after leaving the swamplands of Lanoisville. Whatever its failings, the album conveys a real unity of purpose. What it lacked was one song that raised things to a higher plane, preferably at the expense of an album-opener that went, ‘Wiggle wiggle wiggle, like a bowl of soup.’
-Clinton Heylin (from “Still On The Road…”)

This Was Bros. pseudothrowaway improves on the hushed emotion, weary wisdom, and new-age “maturity” of the Daniel Lanois-produced Oh Mercy even if the lyrics are sloppier–the anomaly is what Lanois calls Oh Mercy’s “focused” writing. Aiming frankly for the evocative, the fabulistic, the biblical, Dylan exploits narrative metaphor as an adaptive mechanism that allows him to inhabit a “mature” pessimism he knows isn’t the meaning of life. Where his seminal folk-rock records were cut with Nashville cats on drums–Kenny Buttrey when he was lucky, nonentities when he wasn’t–here Kenny Aronoff’s tempos are postpunk like it oughta be, springs and shuffles grooving ever forward. The fables are strengthened by the workout, and as a realist I also treasure their literal moments. I credit his outrage without forgetting his royalty statements. I believe he’s gritted his teeth through the bad patches of a long-term sexual relationship even if he still measures the long term in months. And when he thanks his honey for that cup of tea, I melt.
-Robert Christgau

The first Dylan album after Oh Mercy shows Dylan characteristically retreating from that album’s mainstream production values and safe terrain, and refusing to offer a
follow-up. Nevertheless his penchant for recently modish producers has him turn this time to DAVID & DON WAS of Was Not Was, who offer a rougher and less unified sound. It’s a pity Dylan pads out the album with some sub-standard rockism(‘Wiggle Wiggle’ and ‘Unbelievable’) and the ill-fitting, foggy pop of ‘Born in Time’, because the core of the album is an adventure into the poetic
possibilities of nursery rhyme that is alert, fresh and imaginative, and an achievement that has gone largely unrecognised.
-Michael Gray (Bob Dylan Encyclopedia)

It’s a magnificent album, really, and I love every performance on it. Oh, there have been times over the years when I’ve had my doubts about “10,000 Men” or “2×2,” but as with a good concert, each performance in sequence opens doors in listener and singer and musicians and, because the whole is greater than the sum of the parts, the parts are elevated in dignity and expressive power just by their connectedness to that whole. So I find myself getting into the groove of “10,000 Men,” the easy flow of the language, the surprising shouts and whispers of the vocal, the irrepressible Under the Red Sky humor that chugs along throughout (and catches my attention at different moments every time I listen).
-Paul Williams (Bob Dylan: Performance Artist 1986-1990 And Beyond)

Dylan followed Oh Mercy, his most critically acclaimed album in years, with Under the Red Sky, a record that seemed like a conscious recoil from that album’s depth and atmosphere. By signing Don Was, the king of mature retro-rock, as producer, he guaranteed that the record would be lean and direct, which is perhaps exactly what this collection of simplistic songs deserves. Still, this record feels a little ephemeral, a collection of songs that Dylan didn’t really care that much about. In a way, that makes it a little easier to warm to than its predecessor, since it has a looseness that suits him well, especially with songs this deliberately lightweight. As such, Under the Red Sky is certainly lightweight, but rather appealing in its own lack of substance, since Dylan has never made a record so breezy, apart from (maybe) Down in the Groove. That doesn’t make it a great, or even good, record, but it does have its own charms that will be worth searching out for Dylanphiles.
-Stephen Thomas Erlewine (allmusic.com)

One thought on “September 10: Bob Dylan released Under The Red Sky in 1990”